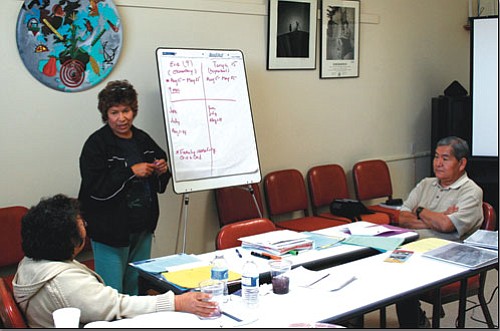 KYKOTSMOVI, Ariz. - When people have disputes, they often want to have their 'day in court.' But now there is a different path at Hopi for resolving conflicts. It is called mediation.

The Hopi Dispute Resolution Services program (HDRS) has been developed by The Nakwatsvewat Institute to resolve conflicts out of court. The idea behind HDRS is to train community members to become mediators.

These neutral mediators then help people settle their differences through a negotiated agreement. The parties come to the table and work with the mediator to reach a resolution that works for all sides.

Mediation is in many ways similar to the historic practice of conflict resolution at Hopi. Radford Quamahongnewa is the spokesperson for the Kikmongwi of Shongopavi Village, and he completed the Nakwatsvewat mediation training program last year.

"Mediation is almost like the Hopi way," says Quamahongnewa. "You contact the other person and try to work it out as smoothly as possible without argument and name-calling. This is a similar way that we do it, it's just more of a structured way with mediation."

Now that HDRS opened its doors to people with conflicts, there is a need for more mediators in the community. Nakwatsvewat has successfully graduated 12 mediators and will begin training again next month.

For those interested in becoming a mediator, they must attend two free orientations; one on Aug. 7 at 2 p.m. and the other on Aug. 9 at 9 a.m. at the Hopi Veteran's Center. This attendance is required to participate in the upcoming full mediation training sessions in the fall.

"We really need people of all ages, professions, life experience and back-grounds to join our mediator pool," Nakwatsvewat Executive Director Pat Sekaquaptewa explains. She says the training program is a good deal for participants. "The off-reservation cost of the training that we provide for free is about $1,500 per person. You get everything you get off-reservation, but this one is tailored to Hopi law and custom and tradition issues."

Muriel Scott, a Hopi legal advocate, has had success using mediation in her law practice. "I see mediation work in my cases," Scott says. "I did one yesterday, and the outcome was great. I thought to myself, 'Why can't we do this in all of our cases?'" She cited the emotional as well as the financial advantages of using mediation. "You can work so much out and save people a lot of mental anguish. We see so many divorces, child custody and property disputes that get settled inequitably [in court]".

Nakwatsvewat sees mediation as an appealing alternative to court because of its lower cost and often quicker process for resolving disputes. Perhaps one day, instead of having one's day in court, people will instead want to have their day at the mediation table.