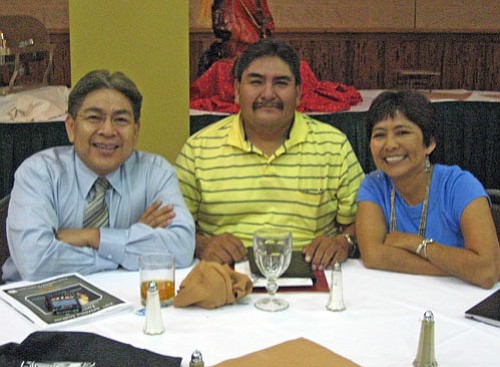 "The commission is looking in the right direction," he said.

The 28th annual Arizona Indian Town Hall was held at the Carefree Resort with the theme of "Protecting Our Natural Resources: Land and Water." The town hall was hosted by the Arizona Commission on Indian Affairs.

Vice Chairman Honyaoma said the tribes and state need to partner on how to address the impact of growth. He is particularly concerned about how to maintain and preserve water.

Honyaoma said while Hopi is not growing quickly that many of the communities around it are growing at a fast pace so they are concerned about how that will impact the water and other natural resources. He said Hopi and Arizona's other reservations may need a buffer zone to protect it.

Honyaoma said he was impressed with the gathering but added that it's necessary the followup work is done.

Bill Havens, a staff assistant to Hopi Chairman Ben Nuvamsa, said the topics of land and water were relevant to Hopi. He said these are always the two biggest issues at Hopi.

Havens said an environmental impact statement of the Black Mesa Mine, which is on Hopi and Navajo land, will show the impact that the mine has had on the land and water.

"Since Peabody has been mining, the streams have been drying up and the aquifer may have been damaged," he said.

Hopi Councilman Cedric Kuwaninvaya said an environmental report is being done on the ranches owned by the Hopi Tribe. He said the BIA is reviewing whether the Hopi ranches are in compliance with environmental standards.

Councilman Kuwaninvaya, who also serves on the Arizona Commission of Indian Affairs board, noted that the Hopi Tribe owns checkerboard land between Flagstaff and Winslow. He said the tribe needs a buffer zone to protect it from encroachment.

Kuwaninvaya said the Hopi Tribe continues to check the status of the Little Colorado River Water Adjudication Settlement to make sure that its water is protected. He said the Hopi Tribe's land and water policies are outdated, so they need to be updated so they can work with Arizona agencies on water, land and other issues.

"We need to communicate and work more closely with the state," he said. "We need to be at the table to work with state and county officials so we can be more involved in the decision making process."

Kuwaninvaya pointed to Head Start as a glaring example of how the state government needs to do a better job of working with tribes. He said Head Start rules were amended in June and an inch-wide document was passed along to the tribe with compliance expected by the end of July.

"They call this consultation with the tribe, but the timeline was too short," he said. "We didn't know this was coming and only found out when somebody was at a conference."

One of Kuwaninvaya's missions at the Arizona Indian Town Hall was to find out how the other tribes were dealing with the new Head Start guidelines.

The Arizona Indian Town Hall was sponsored by the First Nations Development Institute.

Jerilyn DeCoteau, director of policy for the First Nations Institute, said the institute can help tribes and its members with education, advocacy and small grants to help with capitalization.

DeCoteau said the First Nations Development Institute, which is based in Colorado, said tribes have an opportunity to plan for the future knowing that Arizona is expected to grow to 50 million residents by the year 2050.

DeCoteau said tribes need to work together to prepare for the future.

"Coalitions can do the work and it will take coalitions," she said.

DeCoteau said the Native American Assets Coalition is prepared to help businesses with partnerships and capital.

The Arizona Commission on Indian Affairs will issue a report on this year's Arizona Indian Town Hall to help tribes prepare for growth, but in the meantime they gave this summary.