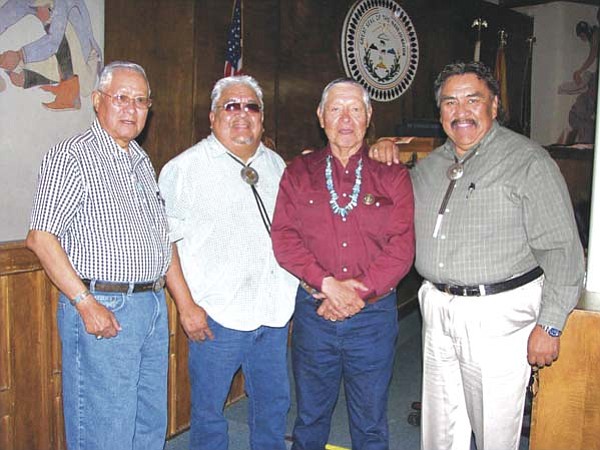 WINDOW ROCK, Ariz. - In its second day of the 2008 Summer Session, the 21st Navajo Nation Council took action on several pieces of legislation including approval of the purchase of the Inn of Gallup (formerly the Holiday Inn) on the city's west side.

The Council voted 55-21 approving the $6.6 million hotel purchase. Council Delegate Lawrence R. Platero (Tohajilee) urged support of the bill for renovations that will increase the value and competition with other area hotels. The bill also appropriated $2.6 million for improvements to the hotel located at 2915 West Highway 66.

The 212-room hotel with convention facilities will be operated by Navajo Nation Hospitality Enterprise. With the development of the first Navajo Nation casino a few miles east of Gallup, some council delegates said the hotel could potentially bring traffic to the new casino by a hotel shuttle service.

In other legislation, the Council considered an act pertaining to how the appointment of people to the Board of Education would be handled. The bill missed passing by just one vote, 58-23. The measure required 59 votes to pass.

Council Delegate Katherine Benally (Dennehotso) said the Board of Education was established to address certain standards, curriculum, certification of teachers and research. "I didn't foresee a clash between the committee and the board," she said.

Also considered was a referendum that would have imposed term limits for council delegates and the speaker of the Council, but it failed to pass by a vote of 16-56. Sponsored by Pete Ken Atcitty (Shiprock), the legislation would have limited delegates to four consecutive terms, or a total of 16 years. A delegate could then take a term off at that point and run for office after four years.

Leonard Tsosie (Pueblo Pintado/Torreon/Whitehorse Lake) said the legislation is compatible with Diné Fundamental Law, but other council delegates thought otherwise. Several council delegates felt that this should come from the Navajo people. Delegates represent their constituents and this legislation was seen as limiting the Navajo people's voice in their government.

Legislation related to human services to establish the Division of Diné Veterans Services failed to have a second motion and was not considered by the Council.

Tsosie opposed giving money to the Controller's office, which would be used to purchase computer hardware used to print checks. His contention was to wait until the budget session, but council delegates went ahead and approved the amendment anyway.

The Council, despite a presidential executive order discouraging divisions from soliciting funds, approved the measure. The Undesignated-Unreserved Fund Balance was $9,458,045 before appropriations were made.

As part of a proposal by Council Delegate Young Jeff Tom (Mariano Lake/Smith Lake), a measure to hire a special investigator to look into matters involving the Biochemical Decontamination Systems (BCDS) based in Shiprock, N.M., that caused a $2.2 million write-off that the Navajo Nation had to absorb financially passed by a vote of 63-11. The special investigator will also look into other questionable business ventures, including the OnSat Network Communications deal.