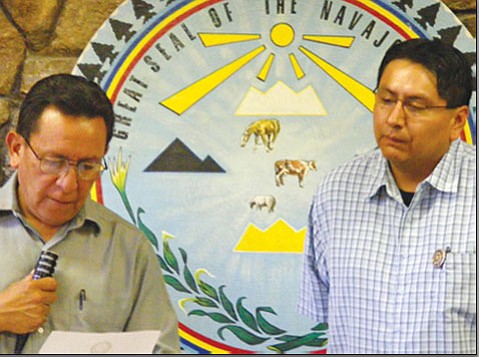 <i>Courtesy photo<br> Jonathan Nez receiving a certificate of appreciation from the committee for leading the Chapter to get the business site leasing authority by Economic Development Chairperson Lawrence Platero.

SHONTO, Ariz. - Years of negotiations with the Bureau of Indian Affairs (BIA) have finally paid off for the Navajo Nation as the Shonto Chapter became the first Navajo chapter and the first Native Community in the U.S. to be delegated business site leasing authority, thus streamlining local economic development and financial progress.

Civics students learn that governments depend on revenue from local resources to pay for infrastructure and public services. Hundreds of studies have found that vibrant economies are based on locally-owned small businesses, which drive the engine of sustainable and healthy development.

A decade ago, visionary Navajo leaders determined to reclaim their authority over business site leasing and economic development to establish a system of self-determination and self-sufficiency based the Navajo people's rich array of inherent assets and capitals. Lengthy negotiations, many trips to Washington and persistence finally resulted in an agreement from the BIA's desk. Signed in 2006 by Navajo Nation President Joe Shirley Jr. and BIA officials, this historic agreement removed the BIA from the Navajo business site leasing process.

This was just the beginning for the Navajo leaders who envisioned taking this process to the local level, empowering communities to be responsible for their own development. While every non-Native business owner and community official takes such opportunities for granted, these avenues for self-sufficiency have been all but closed to tribal communities.

In presenting this legislation, Jonathan M. Nez, Shonto's Council Delegate stated, "With approval of the business site leasing authority, the Shonto Chapter will take the next step toward economic and community empowerment."

In making the motion for approval, Tom LaPahe told the committee, "This document is something that the chapter has worked on for some time with the EDC and the staff. This is what we want for the chapters and it is time that we approve it." Each committee member expressed support for an affirmative vote.

Roy Dempsey stated that the leasing authority "is a way to address disparity and help the local governments earn income," adding, "We can stop going to Washington for money and help."

Mel R. Begay called the plan "a move towards government reform and opportunity for the people to take control. This is something we long to see across the Navajo Nation."

Following these remarks, the EDC voted unanimously to accept Shonto's plan, which was also a vote for local control, autonomy, and the goals of the Division of Economic Development (DED) and the Navajo Nation to strengthen local economies. In announcing the EDC's decision, Platero said that Shonto now has the responsibility to "put the new authority to work and not let it idle." He pledged to "keep looking for ways to streamline this process to facilitate business in the Navajo Nation, to make it faster and easier for committees and chapters."

With local leasing authority, existing business sites and planned developments can move forward with greater speed. Shonto's immediate projects include the Sháá'tóhí Artist and Travel Plaza on a 10-acre site at the junction of Highways 160 and 98, and the Sháá'tóhí Public Service and Housing Complex on 18 acres adjacent to the Shonto School. It will begin developing business proposals and financial strategies for these key sites.

By achieving LGA certification in 1999, the Shonto Community reclaimed its governance rights. Now this new business site leasing authority gives the community the tools it needs to build local self-sufficiency and take responsibility for creating a vibrant economic future.