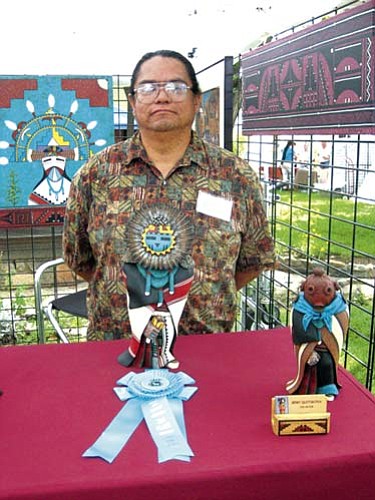 PRESCOTT, Ariz. - The painting of cranes near water could be a real scene that the painter viewed. That would make sense because Michelle Tsosie Sisneros lives by the Rio Grande River.

It is a real view; it's just second hand. Sisneros' mother makes jewelry from cranes that she's seen and Sisneros painted the piece after closely examining her mother's jewelry.

The painting is acrylic on water color. Sisneros is self-taught. She grew up in Window Rock where the landscape shaped her art beliefs.

"I felt a deep sense of vastness in my life there. The land was long and far in between the people living there," she said.

Sisneros began painting as a child.

"The images I paint are from the people who have touched my life in a profound way and the Mother Earth I live on," she said. "I paint in a semi-traditional abstract form because that is how I see Mother Earth."

Sisneros also writes poems and short stories about her paintings because she feels there is a message to her work that she wants to pass on to those who take her work home.

She graduated from Window Rock High School before going on to College of Santa Fe and Northern New Mexico Community College. She became a police officer before deciding that art was more rewarding for her.

Sisneros said she has made a pledge to be true to herself as an artist.

"The truest test of my gifts is understanding my integrity as a woman, a human being and honoring my life and the Mother Earth I am allowed to live on," she said.

Sisneros has won awards from Southwest American Indian Arts, Pueblo Grande Museum and Museum of Northern Arizona. She is in many private collections including Robert Redford's.

Her paintings are available at Chimayo Trading and Mercantile in Chimayo, N.M. For more information, telephone (505) 753-8677 or visit www.michelletsosiesisneros.com.

Benson Manygoats won best of show for his jewelry. The other award winners at the Prescott Indian Market were:

Tim Washburn took first place in the sculpture division for his sculpture of Watermelon Erasers. This piece is on sale for $12,500 and took him six to eight months to make, although he was also working on other pieces at the time.

Washburn, who is Navajo, enjoyed creating or building objects at a young age. He was raised as an orphan and was influenced by his artistic parents. He was born in Ft. Defiance, but lived with a foster family in Utah after both his parents died.

His natural mother was a talented weaver.

"You will see her influence in my sculptures," he said. "I create Native American women with their intricate woven Navajo rugs."

Washburn said his father was a hard working carpenter for the tribe. He said they both had gentle natures.

"I use their facial expressions in my sculptures," he said. "Both sets of my parents took great pride in their accomplishments and hard work."

Washburn wanted to build his own car after he graduated from high school and took some college classes, but gave up on that and soon picked up the interest in sculpture. In 1980, he returned to Kaysville, Utah, with his foster family. He worked at the family dairy farm and started working part-time on his sculpture.

In 1988, Washburn was able to get into his sculpture full-time. His themes have been Native Americans, animals and western scenarios. He creates one-of-a-kind sculptures in marble and other stones. He is known for large pieces with the largest at more than 13 feet and weighing 15 tons.

"I endow my figures in unmistakable personalities that spark recognition, leadership, strength, boldness and pride," he said.

Washburn likes working with Native American history in a manner that will touch people's hearts.

Gerry Quotskuyva, Hopi, placed third in the sculpture and carving division for his Sunface Tawa or katsina.

Quotskuyva said he was pleased with the third place finish because it's more about having fun and competing with peers than winning.

The Sunface katsina is for sale for $1,600. This is Quotskuyva's first return visit to the Prescott Indian Art Market in five years. He had a gallery in Sedona, but it closed so now he's hitting the art circuit.

Born in Winslow, he was raised in Flagstaff. After high school, he started making dream catchers and shields for Stucky's. He eventually opened his own store in Cottonwood. About 12 years later, he started carving katsinas and 18 months later he started painting. Those are his two art forms today.

Quotskuyva majored in electrical engineering at Pima Community College and the University of Arizona. For more information, telephone (928) 300-2206 or visit www.gquotskuyva.com.

In the early 1970s, there was a boom in Indian jewelry so at the age of 14 he started silversmithing. During the summer breaks, Lee worked at various silversmithing shops in the Gallup area.

Lee began competing in juried art shows in 1988 and continues that competitive artistic spirit today. In 1999, he was asked to join in making a piece of the Millennium Sampler Concho Belt along with 11 renowned Indian Market jewelers.

Lee, a full-blooded Navajo, is from Mexican Springs, N.M., but currently resides in Albuquerque with his wife Nadine and three sons. He is a graduate of Tohatchi High School. For more information, call (505) 831-5022 or visit allisonlee@nativeart.net.

Baje Whitethorne Sr. has won awards at many shows for many years so it was no surprise when he took second place in the two-dimensional art division.

Whitethorne's art is mostly spontaneous and a reflection of his Navajo culture. He is self-taught and most of his art shows his life experiences. He also works in abstracts.

Whitethorne's paintings are usually acrylics or watercolors, but occasionally he will work in oils.

Born and raised in Shonto, Whitethorne graduated from Tuba City High School. He majored in art at Grand Canyon College and Northern Arizona University. He continues to work with schools through residences and consulting jobs.

Whitethorne, who works out of a studio in his home, has four brothers and four sisters. Each is an artist in some way as the family talents include pottery, weaving and jewelry. His mother, Alice, is a renowned weaver.

Jesse Hummingbird, Cherokee, didn't win any awards but he remains a favorite of the annual visitors to this show.

Hummingbird has won many awards including recognition from the Fred Jones Museum of Art at the University of Oklahoma.

Hummingbird tantalizes art lovers with his colorful paintings that mix the modern and traditional. For example, his painting "Let the Night Begin" shows the stomp dance, which is used for prayers. The background has birds and stars. A lot of his art shows the night including the reoccurring moon.

Hummingbird mixes his traditional Cherokee art with many other art forms including the Jewish painter Chegal. He mainly paints acrylics and etches.

Hummingbird has won major awards every year since 1984. In 1992, he was the Gallup Intertribal Ceremonial poster winner.

Hummingbird, who has lived in Bisbee for about 20 years, was commissioned in 2000 to paint one of his characters on the new Indian motorcycle.

His paintings sell for as low as $550, which is inexpensive compared to a lot of Indian art.

"I have to make a living, but art should be affordable," he said.

Hummingbird said he likes the Sharlot Hall art show because there is a good variety of art and something for everybody's price range.

"I also like this show because it has a lot of variety," he said.

Hummingbird started to attend college, but after nine weeks decided it was not for him. He worked construction and other jobs before deciding about 25 years ago to make art his career.

Hummingbird said his art is self-taught, but he continues to learn from friends.

Born in Oklahoma, he was raised in Tennessee and South Carolina. He and his wife Sandy have no children, but two dogs.