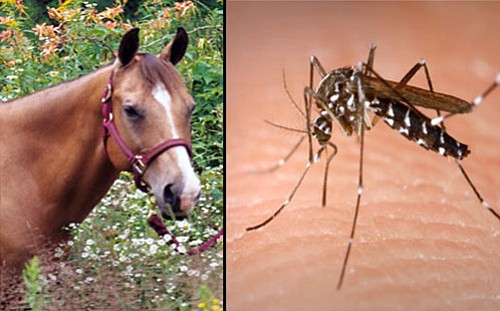 WINDOW ROCK, Ariz. - The Navajo Nation Veterinary Program and the New Mexico Department of Health have announced that a horse from the Fort Defiance area tested positive for West Nile Virus recently and needed to be put down.

Navajo Nation Veterinarian Scott Bender said the free-roaming, unbroken horse was from an area east of Fort Defiance. He said the owners noticed it was ill and corralled it. When it lay down and couldn't get up, the veterinary program was called.

Lab tests later determined the horse was infected with the West Nile virus. Its condition deteriorated to the point that it needed to be put down, he said. This was the first case of West Nile Virus found this year on the Navajo Nation, he said.

"The best, easiest and most effective way to protect horses is to have them vaccinated against West Nile virus," Dr. Bender said.

According to the New Mexico Department of Health, so far this year there have been no human laboratory confirmed cases of West Nile Virus infections in New Mexico.

"When a horse tests positive and hasn't moved from its residence, that means that there are mosquitoes infected with West Nile Virus in the area," said Dr. Paul Ettestad, the state public health veterinarian at the Department of Health. "Recent rain across New Mexico has provided numerous breeding sites for mosquitoes so it is especially important to protect yourself from being bitten by mosquitoes and make sure your horses are vaccinated against West Nile virus."

Common West Nile symptoms in humans are fever, nausea, headache, and muscle aches. In rare cases, West Nile Virus can cause meningitis or encephalitis. If someone has these symptoms, they should see their health care provider. People older than 50, and those with other health and medical issues, are at most risk for serious disease from West Nile Virus.

Many infected horses may show no symptoms other than fever. However, symptoms can include trembling, facial twitches, staggering and lack of coordination, confusion, an appearance of depression. In severe cases, a horse may go down, try standing and fall again. Extreme cases result in death.

Dr. Bender said the Navajo Nation will continue its mosquito surveillance until the fall. The New Mexico Department of Health has set up a West Nile surveillance system across the state, providing traps, shipping and testing for local mosquito control programs that collect mosquitoes. The New Mexico Department of Agriculture's Veterinary Diagnostic Services conducts West Nile testing in horses, mules and donkeys at the request of a veterinarian.

To protect yourself from West Nile Virus infection:

• Use insect repellent on exposed skin and clothing when you go outdoors. The Centers for Disease Control and Prevention recommends repellents containing DEET, Picaridin, oil of lemon eucalyptus, or IR3535 for use on skin, and permethrin for use on clothing. Always follow label directions when using insect repellents. Many of these products are available at Wal-Mart or outdoor stores.

• The hours from dusk to dawn are peak biting times for mosquitoes. Take care to use repellent and protective clothing, or avoid outdoor activities during these times.

• Eliminate water-holding containers where mosquitoes lay their eggs, such as old tires, and regularly change the water in birdbaths, wading pools, livestock troughs and pet water bowls. Make sure rain barrels are tightly screened. If unable to change the water, there are mosquito control treatments that can be added to the water.

• Keep windows and doors closed if not screened. If you leave your house doors or windows open, make sure they have screens that fit tightly and have no holes.

• Vaccinate your horses to protect them from West Nile virus and Western equine encephalitis, which is also carried by mosquitoes and can be confused with West Nile Virus.

In 2007, New Mexico had 60 human cases of West Nile Virus with three fatalities.

For information about West Nile, including fact sheets in English and Spanish, go to the Department's Web site at