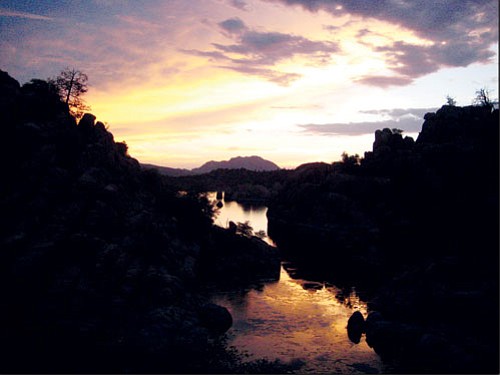 <i>Photo by Stan Bindell/NHO<br> A picturesque photo of Peavine Cove, perhaps one of the best places to see a beautiful Arizona sunset.

Author's note: Exercise and a healthy diet can help ward off diabetes and some other ills. The 100 mile club began on Hopi awhile back to promote healthy lifestyles. As a hiker, I do more than 200 miles per year. This year I hope to hit the 365 mile mark in order to average one mile per day. I know some hikers who average more than 100 miles per week. We each have to decide what is the right amount of exercise for us. To promote exercise, hiking, a love of nature and cool points of Arizona this column will appear throughout the summer.

PEAVINE TRAIL, PRESCOTT, Ariz. - Some experienced hikers turned up their nose at the Peavine Trail because it's too flat and there can be too many people on this urban trail.

But this is a favorite stay-in-shape trail and can also be a favorite for naturalists because of the wildlife, birds and an unbelievable assortment of flowers.

Peavine Trail goes by Watson Lake, which is used for boating and fishing. Intermittent shade can be found throughout the trail thanks to willows, sycamores and cottonwoods. The path also includes the rocky formations of Granite Dells.

This past week found eight to 12 feet tall purple thistle - anyone ever seen a thistle forest? But also firecracker red penstemon, gourd flowers, sunflowers, Mexican Hat flowers, daisies, and yellow, pink and purple flowers that couldn't be identified by this hiker were found along the trek.

As for wildlife, over the years I've seen a bobcat sunning itself in a field close to the water, a javelina that was a few feet in front of me before disappearing into the bushes and a herd of about 40 antelope or deer that was drinking from the lake at around sunset.

One lesson that was learned was not to come out on the trail after dark without a flashlight. About three years ago, I was running out and stepped on a snake. Fortunately it bit only my jeans and didn't get through. Last week, coming out after dark I spotted a snake on the side of the trail and my lesson paid off.

As for birds, there are red winged blackbirds, herons, many different types of hawks and songbirds, cormorants, many other types of ducks and Canadian Geese.

Occasionally eagles can be spotted.

Bullfrogs are not native to Arizona, but someone dumped at least enough here for them to proliferate and their sound can be heard by those close to the lake.

While the main trail is often busy with walkers, hikers, bicyclers and equestrians, the Watson Woods Preserve can be found about a half mile from the trailhead as well. While this area is small, it is not as crowded and offers a riparian's dream.

The Peavine Trail goes about 4.5 miles in, so nine miles roundtrip. Hikers can turn around at any point. It also links with a trail going to Prescott Valley that goes at least another four miles.

At about the 1.5 mile mark is the Cove Trail, which goes to the cove. But more importantly for photographers the cove can be seen from the main trail and is one of the best places in Arizona to watch a sunset. This is where photographers learn that what the eye sees isn't necessarily what they get with a small digital camera.

The trail lies near an old Santa Fe Rail line. There are benches about every half mile for those who want to take a rest and there are also mile markers.

For more about the Peavine Trail see "Prescott and Central Highlands Trails" by Ron Smith.

Out and about: Hiking is still an option
Out and About: Explore the peavine trail before it gets too hot
A Tale of Two Trails: Peavine and Brins Mesa
Watson Lake Loop: a natural cure for the wintertime blues
Getting out - Aspen Creek Trail
Contact Us
Submit Questions, Comments, or Story Ideas