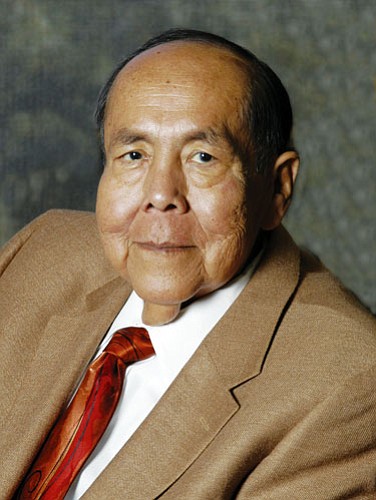 Angelo Joaquin Jr., current ASM Program Coordinator, recalled Hartman's guidance. "I first worked with Hartman Lomawaima ... when I was executive director of Native Seeds/SEARCH and he was a member of the Board of Directors. It was a turbulent time ... as changes were being implemented, [but] his was the voice of reason-always listening respectfully and considering what had been spoken ... His presence at the board table certainly helped the organization work through some rather complex matters of growth and cultural significance. I will miss my friend, colleague and mentor more than I can imagine at this moment. However, I am confident that when I need inspiration, my memories of Hartman will bring a smile to my face and enable me to work through whatever lies front of me."

Born a member of the Bear Clan at the village of Sipalovi on Second Mesa in northern Arizona, Lomawaima grew up immersed in both Hopi and Anglo cultures. He graduated from Northern Arizona University in Flagstaff, and during his graduate studies at Harvard familiarized himself with the vast anthropological archives and collections at Harvard's Peabody Museum of Archaeology and Ethnology. Lomawaima would later become a member of the Peabody's board of overseers, which guides its program development and policy.

Hopi Tribal Chairman Benjamin Nuvamsa recounted his memories of Lomawaima. "I've known Hartman, my clan brother, since our boyhood days. I last saw Hartman at the home dance at ... Sipaulovi Village last year. He plays an integral part of the home dance ceremony each year and it's ironic that the home dance will be held soon this month at Sipaulovi. Hartman has accomplished a great deal not only for himself, but for all of Native America. He certainly left a legacy [and] made us, the Hopi people, very proud."

Lomawaima began his professional career as senior administrative officer of the Hearst Museum of Anthropology at the University of California at Berkeley. He and his wife, Tsianina, later moved to the University of Washington. Tsianina is currently professor and head of the American Indian studies department at UA.

In 1984, he became the associate director at the Arizona State Museum, or ASM, and professor of American Indian studies. Lomawaima was named interim director when George Gummerman resigned as director in 2002. He became the permanent director in 2004.

At ASM, Lomawaima helped shepherd the museum's Pottery Project, which started in 2000 with a grant from the Save America's Treasures Initiative, to completion in May 2008. The exhibit houses 20,000 whole ceramic vessels in a climate-controlled vault, part of which is open for public viewing.

Another highlight of Lomawiama's administration was a collaboration between ASM and UA to redesign and rebuild the front entrance to ASM's historic building to make it universally accessible. The high point of this project was the installation of a large sculpture, "Watercarrier," by Apache artist Craig Dan Goseyun, and funded by Arnold and Doris Roland, at the entrance to the building.

Lomawaima also actively campaigned for ASM's presence in Downtown Tucson's Rio Nuevo project, and was a member of a committee working on The Governor's Historical Advisory Commission that is planning Arizona's Centennial activities for 2012.

ASM Associate Director Beth Grindell said it was amazing how well-known Lomawaima was, not only among museum administrators nationwide, but through his associations with American Indian artists and his home in the Hopi Nation. He was actively involved in tribal affairs and was past president of The Hopi Foundation and a trustee of the Hopi Education Endowment Fund (HEEF).

LuAnn Leonard, Executive Director of HEEF commented, "As a founding member of the [HEEF] Hartman was instrumental in building a solid foundation to its success. Hartman will be missed for the wisdom and generosity he shared with the HEEF and the Hopi Nation."

His list of affiliations included posts as principal consultant to a number of museums including the California Academy of Sciences in San Francisco, the Carnegie Museum in Pittsburgh and Plimoth Plantation in Plymouth, Mass., a member of the board of directors of the American Association of Museums and a member of the national steering committee to develop an American Indian Museums Association.

He also served as principal consultant and humanities scholar for the documentary film, "Coming to Light: Edward S. Curtis and the North American Indian," by Anne Makepeace.