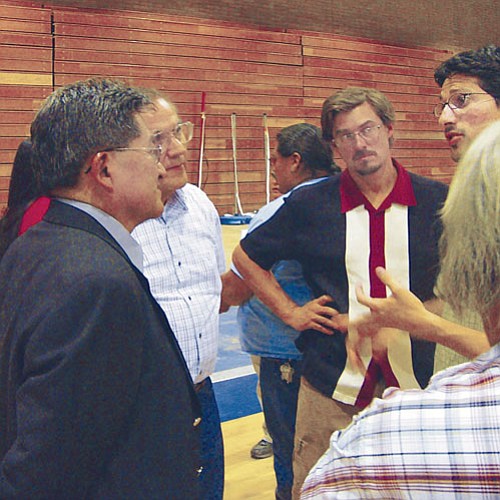 <i>Photo by S.J. Wilson/NHO</i><br> From left: Hopi Tribal Chairman Ben Nuvamsa, Al Quouawayma, Andy Bessler, Tim Grabiel (attorney with the NRDC) and Jerry Honawa (foreground) discuss the potential for an extension on the comment period for the Black Mesa DEIS.

KYKOTSMOVI, Ariz. - When one reads the Black Mesa Project Draft Environmental Impact Study (EIS), it appears that the Hopi Tribe is a cooperating agency in the process-something that is just plain wrong, according to Vernon Masayesva of the Hopi Tribe.

"The Office of Surface Mining wants you to know that the Hopi Tribe was involved in creating this document," Masayesva said, as fellow tribal member Jerry Honawa hoisted the heavy bound document in the air for all to see. "Now we are finding out, that's not the way it is. This [the Hopi Tribe as a cooperating agency] was never discussed by the Hopi Tribe. This was never brought to the Hopi Tribal Council."

"We are here to educate the public, to explain what the Draft EIS and the comment period is all about so that the Hopi people can make an informed statement," Masayesva said.

There are other problems that Masayesva found troubling.

Describing a page-by-page analysis of the Draft EIS, Masayesva, NRDC members and others discovered many areas that had not been studied.

"The EIS was incomplete," Masayesva said. "There was no plan by Peabody to repair damage to the N-Aquifer-there is a plan for surface reclamation and they do that pretty good, but there was nothing for the water."

Also troubling was the fact that the government had not requested Peabody to post a bond, Masayesva said.

"Which [alternative] do you want to go with, if any," Masayesva asked the audience. "Maybe we may want to develop our own alternative."

As it stands, the Draft EIS takes into consideration three alternatives. Alternative A creates the Black Mesa Complex and was based on the continued operation of the Mohave Generating Station, but operation of the Laughlin-based power plant was suspended in December 2005.  Alternative A also provided the infrastructure to pump water from the Coconino Aquifer, however did not authorize the actual use of C-aquifer water.

Alternative B will provide conditional approval of the Life-of-Mine revision without a coal slurry pipeline or use of C-aquifer water. This alternative will incorporate Black Mesa Mine surface facilities and coal deposits into the Kayenta Mine permit area.

Alternative C is supposed to be the "no action" alternative, although, with careful reading, it could be argued that the Black Mesa Complex is created in all three alternatives, said Sean Gnant, a Phoenix-based legal assistant who volunteered his time to the Black Mesa Trust.

Gnant fears that whichever alternative is chosen-A, B, or C-all will spell the same fate for Hopi (and Navajo) coal reserves and that Peabody Coal will tie up all the coal reserves within the Kayenta and Black Mesa lease areas through 2026 and beyond.

This opinion was offered during meetings at Kykotsmovi and Forest Lake on July 1 and 2, co-hosted by the Black Mesa Trust, Black Mesa Water Coalition, Natural Resource Defense Council and the Sierra Club.

Gnant's reaction is reasoned by careful study of the so-called Black Mesa Mine Complex-which is created by combining the Black Mesa and Kayenta mine lease areas.

"What [Peabody] wants to do is to annex and tie up Black Mesa coal until 2026, no matter what alternative is picked," Gnant said.

In 1966, language allowed that should the Secretary of the Interior determine at any time that operation of wells by Peabody is endangering the N-aquifer, he or she may require Peabody, at its own expense, to find another source of water, Gnant continued. The problem is that the language reads "may," instead of "shall" he said.

"In 1990, then secretary Lujan charged Peabody with finding an alternative source of water. This report does not give rights to the water, it just gives them the right to build a pipeline," Gnant said, explaining that Peabody might just as well name the Pacific Ocean as an alternative water source. "They have as much rights to that as they do to the Coconino Aquifer."

"There is only one reason to make it bigger," Gnant said. "They plan to push more water through it.

"The biggest hydrology problem the tribes have with the Black Mesa Project Draft EIS is that a very probable outcome will be the slurry pipeline will be expanded and the C-aquifer project will not be included in the final record of decision. This means that Peabody will continue to deplete N-aquifer groundwater at rates greater than ever before for decades to come.

"Alternative A is still 100 percent on the table," Gnant said. "No one has taken it off."

Gesturing to a highlighted map, Gnant illustrated that there are only two mining areas left in the Kayenta Mine permit area, whereas there are eight coal reserves still untapped in the old Black Mesa mine which used to feed the Mohave Generating station.

Gnant also expressed his worries about the semantics involved, saying that Mohave is merely sleeping.

"Mohave is in a slow turn, it's not shut down. There is a staff of about 80 people there, and the plant is moving real slow. If it stops, it rots-so the plant is idling. I don't know anyone who idles a car they don't plan on driving again."

"Alternative C: Disapproval of the Life-of-Mine Revision (No Action). Disapproval of Peabody's life-of-mine permit revision. No approval for mining coal at the Black Mesa Mine to supply Mohave Generating Station but continued operation of mining at the Kayenta Mine to supply coal to the Navajo Generating Station, because Peabody already has an approved permit for this mine and has the right of successive permit renewals. No incorporation of Black Mesa Mine surface facilities and coal deposits into the Kayenta Mine permit area."

Winterringer also referred interested parties to examine page 2-24, section 2.2.3 of the Draft EIS, which provides a similar statement, adding that "OSM's decision under Alternative C to disapprove the LOM [Life of Mine] revision. The Black Mesa mining operation, coal-slurry preparation plant, and coal-slurry pipeline that supplied coal to the Mohave Generating Station until the end of 23005 would not resume operations. The coal-washing facility and the C aquifer water-supply system, in any configuration, would not be constructed."

Winterringer stated that it wasn't true that under all three alternatives Peabody would have access to Black Mesa Mine coal.

Masayesva expressed a common concern that the comment period-from May 23 through July 7- was too short to allow for adequate preparation for public comment, especially considering the ceremonial obligations of Hopi Tribal members during this time. Hopi Tribal Chairman Benjamin Nuvamsa wrote a letter to Winterringer on July 3 asking for an extension for comments.

"As predicted, the OSM did not grant the comment extension and informed the tribe by phone [on July 6]," said Andy Bessler of the Sierra Club's Tribal Partnerships Program. "OSM has told us that they expect to release the Final EIS in late November to early December with a Record of Decision to follow shortly thereafter. We have 30 days to appeal the decision."