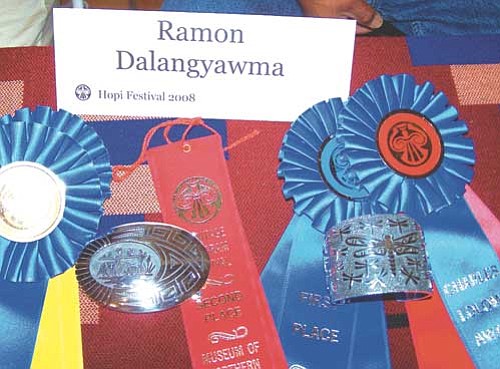 FLAGSTAFF, Ariz. - Artists from the Hopi Tribe and staff at the Museum of Northern Arizona (MNA) celebrated what was termed by Hopi Tribal Chairman, Ben Nuvamsa as "75 years of friendship, appreciation and honor for Hopi creativity and innovation."

What began in the 1930s as a weekend event, the 75th Hopi Festival of Arts and Culture is the oldest Hopi venue in the world and brought over 60 artists from Hopi together to immerse visitors in their language and artistry as well as dances focused on traditional Hopi values of humility, cooperation, respect, and continued earth stewardship.

MNA Director Robert Breunig acknowledged the recent passing of noted Hopis at the Friday night opening reception. Ferrell Secakuku was acknowledged, along with Emory Sekaquaptewa, Bertha Wadsworth, Valjean Joshvema and Wallace Hyeoma. Bruenig gave them each special credit for helping to sustain Hopi art and life values to their own home communities.

"We want to remember these special Hopis, for each of their individual, meaningful contributions to not just their own tribal members but to each of us in the outside world, who appreciate and love Hopi tribal art and culture," he said.

In a special gallery at the museum, Breunig hand selected several examples of Hopi work that has been purchased since that original 1930 introduction to the public which gave a stunning overview of how some portions of Hopi art has changed dramatically, like painting, jewelry or clothing design and how some mediums, like textiles or pottery continue to utilize centuries old techniques and patterns that are still extremely marketable today.

What was also apparent, is that MNA is extremely interested in maintaining a very personal relationship with artists from the Hopi mesas through their outreach programs, art internships and yearly invitations to be involved in museum educational programs on the museum grounds.

There were also booths that featured creative endeavors like the Three Mesas Productions, a performing arts based idea of Leslie Robledo of Bacavi village, which utilizes puppets and young Hopis teaching positive messages with each presentation.

Special features, like the Nuvatukya'ovi Sinom Dance Group, were presented to the public at the Friday parade crowd and twice during the weekend festival. Miss Hopi Kassondra Yaiva and her first attendent Emmalynn Thompson, were also at the event as goodwill ambassadors raising awareness of culture and wellness affecting Hopis.

There were two separate master craftsman presentations - one by Ruby Chimerica in basketry and another with an emphasis on Hopi traditional textiles, showcasing last year's Best of Show winner, Benson Honyumptewa assisted by Louie Josytewa.

To date, there are only about 20 active Hopi weavers, but back in the 1930s the MNA recorded approximately 213 Hopi weavers, all men.

Robert Rhodes was also on hand to discuss the merits of his brainchild, art mastery school "Hopitutuqaiki" (The Hopi School), a summer arts program in its fourth year of operation. Hopitutuqaiki offers students apprenticeships in various art areas, featuring master art instructors, who are primarily all Hopi.

This intergenerational approach to learning has students aged 3 to 67 exchanging ideas, talents and history side by side in small classroom settings. The classes run from June 2 to the first week in August. Some of the featured art classes are glass blowing, papermaking, contemporary carving, Hopi weaving, Hopi knowledge for boys, drawing and painting, quilting, clay sculpture and Hopi cooking.

This year's big winner was Tressa Collateta Kaganveama who won Best of Show for her submission of Four Cradle Katsina Potasivu/Coil Basket. Kaganveama was not present at the show, but her work is widely respected as true to traditional form with innovative construction themes.

Taking home two major awards this year, including the coveted Charles Loloma Award and the MNA Spirit Award was Ramon Dalangyawma from Hotevilla.

Dalangyawma, age 54, has been a master jeweler specializing in traditional Hopi overlay for the past 28 years. Dalangyawma was taught the art of silvermaking through the Hopi Crafts apprenticeship program and credits Emory Holmes for mentoring him.

Dalangyawma, says that designing the pieces are the most difficult part of the process for him and was somewhat surprised in his two awards from the weekend.

"The Charles Loloma award was especially meaningful for me to win, because my godfather, the late Neil Kayquaptewa was Badger clan like Charles Loloma, and each piece has its own degree of difficulty. My work goes in stages, and the dragonfly motif was something that I wanted to try, since it seemed to be a very popular design. I sold this piece on opening night of the Hopi show and it was pretty rewarding since I am not one to try lots of new techniques. I'm getting too old for that," he said.

The winning Dalangyawma bracelet sold for $1,250.

Asked if he could provide advice for budding young artists, Dalangyawma said, "I am always open to the idea of helping others who might be interested in silversmithing. I see that some of our young Hopis need guidance and I always thought that maybe I could provide some of this guidance from an artistic standpoint."

He ended by stating, "Artistic expression comes from within and maybe I could help develop that for someone, I have only mentored my own son, who is now in the military, but if someone is sincere, I would be more than willing to help them."