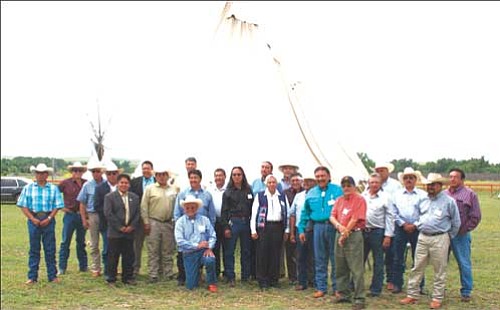 <i>Photo by Joshua Lavar Butler </i><br>Tribal leaders from the central and western portions of the United States converged for the quarterly meeting of the Council of Large Land Base Tribes on June 26 in Crow Agency, Mont. Pictured are tribal leaders from various tribes.

CROW AGENCY, Mont. - With the theme of teamwork and political mobilization, several tribes from throughout the central and western portions of the United States converged for the quarterly meeting of the Council of Large Land Base Tribes on June 26 in Crow Agency.

The Navajo and the Crow nations led the discussions with Crow Nation Chairman Carl Venne as the chair of the Council and Navajo Nation Council Speaker Lawrence T. Morgan as the vice chair.

Chairman Venne was pleased to welcome a Navajo delegation that was led by Speaker Morgan. The meeting was held in conjunction with the Crow Native Days - an annual tribal celebration.

The Council meetings provide an important venue for tribal leaders of large land holdings; the group is also seeing movement of smaller tribes joining the discussion in hopes of creating a unified voice for Indian Country.

Joe Garcia, president of the National Congress of American Indians (NCAI), attended the meeting and presented information regarding various legislative initiatives under the new administration. Garcia also provided updates to NCAI activities and he encouraged the mobilization of the Indian Vote for this year's elections.

Like Speaker Morgan, Garcia is advocating the importance of the Indian vote.

Garcia's update provided some information on the Indian Health Care Improvement Act, which passed in the U.S. Senate by a vote of 83-10. The bill still needs to pass in the House and Garcia encouraged all the tribal leaders to support the bill.

The Council also approved various resolutions in support of issues affecting tribes across the country. A unified voice is much stronger for tribes as tribes' advocate issues at the national level in Washington, D.C.

Unification of one voice was stressed by Chairman Venne and Speaker Morgan. Venne said that Indian tribes have reached an important time in its history. The upcoming presidential elections are vitally important and tribes may have an opportunity to help modernize the Bureau of Indian Affairs and the Department of the Interior.

Venne mentioned that Sen. Barack Obama, Democratic presidential frontrunner, visited their nation recently and he is committed to working with Indian tribes. Venne explained that the tribes should not let these commitments go and should build upon them to make sure that they become reality.

"This is an opportunity that will give us the chance to put forth what we want as Indian tribes," Venne explained. "It's been too long that Indian people have sat idle and allowed others to make decisions on our behalf. We need to have a seat at the table and we need to get out and vote - we have a great say in what goes on in Indian Country and that is how it should be."

Speaker Morgan agreed with Chairman Venne and said that "as Native people, we need to stick together and fight. We need to be organized and we can initiate change if we all work together - we will not take a back seat."

Morgan and Venne agree that a Native American needs to be placed in the position of Secretary for the Department of the Interior. Change will not come about, unless it is done by someone who knows Indian issues and for someone who has lived on an Indian reservation - someone who knows the challenges first hand.

A resolution seeking support from the Council was presented by the Navajo Nation to add Mount Taylor - one of the four sacred mountains to Navajos - to the permanent listing of the New Mexico Register of Cultural Properties.

The third resolution sought support in S.B. 1080, which is a bill to be presented to the 110th U.S. Congress to develop a program to acquire interests in land from eligible individuals within the Crow Reservation in the state of Montana and for other purposes.

The approved resolutions by the Council will increase advocacy for the issues and are often used in congressional testimony to strengthen support.