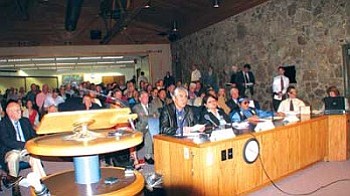 Navajo Nation President Joe Shirley Jr., testifies before the Subcommittee on National Parks, Forests and Public Lands March 28 in Flagstaff, stating that despite testimonials in support of uranium mining, the Navajo Nation remains opposed to any and all uranium mining efforts (Photo by George Hardeen, NN-OPVP).

FLAGSTAFF - Navajo Nation President Joe Shirley Jr., told a Congressional subcommittee March 28 that the Navajo Nation remains opposed to uranium mining on or near its land, and will take whatever action necessary to prevent it.

Testifying at a joint oversight hearing before the Subcommittee on National Parks, Forests and Public Lands at the Flagstaff City Council Chambers, President Shirley said Navajos "do not want to not sit by, ignorant of the effects of uranium mining, only to watch another generation of mothers and fathers die."

"We are doing everything we can to speak out and do something about it," he said. "We do not want a new generation of babies born with birth defects. We will not allow our people to live with cancers and other disorders as faceless companies make profits only to declare bankruptcy and then walk away from the damage they have caused, regardless of the bond they have in place."

About 200 people filled the council chamber at the Flagstaff City Hall. Also presenting testimony during the first morning panel with President Shirley was Kaibab Paiute Tribal Chairwoman Ona Segundo and Havasupai Tribal Chairman Don Watahomigie. Both also testified that their tribes are opposed to renewed uranium mining in and around the Grand Canyon region.

President Shirley said that as the Cold War raged more than 50 years ago, the United States government began a massive effort to mine and process uranium ore for use in the country's nuclear weapons programs. Much of that uranium was mined on or near Navajo lands by Navajo hands.

"Today, the legacy of uranium mining continues to devastate both the people and the land," he said. "The workers, their families, and their neighbors suffer increased incidences of cancers and other medical disorders caused by their exposure to uranium. Fathers and sons who went to work in the mines and the processing facilities brought uranium dust into their homes to unknowingly expose their families to radiation."

"The mines, many simply abandoned, have left open open scars in the ground with leaking radioactive waste. The companies that processed the uranium ore dumped their waste in open - and in some cases unauthorized - pits, exposing both the soil and the water to radiation."

Asked by Congressman Pastor whether the Navajo Nation sees any benefits to come from uranium mining, President Shirley said the opposite has been true in the past.

"The remnants of uranium activity continue to pollute our land, our water, and our lives," he said. "It would be unforgivable to allow this cycle to continue for another generation."

He explained that in recent years, many companies have approached the Navajo Nation with promises of riches.

"They have promised us newer and cleaner methods of mining that they say will not harm the land, the water, or the people," he said. "We have repeatedly declined their offers."

He said the Nation has been told that in situ leach mining is a process that injects a solution into the ground to separate the ore from the surrounding rock.

"These companies claim the process is harmless," President Shirley said. "The science on this process is, at best, inconclusive, and, at worst, points to increased radioactive contaminants in the groundwater after the mining operations cease."

He said he cannot believe the claims of safety "when history and science establish a different record."

"The Navajo people have been consistently lied to by companies and government officials concerning the effects of various mining activities. Unfortunately, the true cost of these activities is understood only later when the companies have stolen away with their profits leaving the Navajo people to bear the health burdens."

Asked by whether he was contacted by the Forest Service about allowing VANE to conduct exploratory drilling near the Grand Canyon, President Shirley said no. He added that any Navajo official or division director who may have been contacted would have given the Forest Service the same answer.

"Every testimony coming from the Navajo Nation, whether it's through me, any of our council delegates, any of our legislators, it's no, we do not want the further mining of the uranium ore on Navajoland or on land contiguous to Navajoland," he said. "So if there's any conversation that took place with any of the U.S. Forest representatives, that's what they've heard."

"We just don't want it," he said. "We have a law in place, and that's the Diné Natural Resources Protection Act that says no way will we allow, no way will the Navajo Nation or any of its departments or any of its staff allow the further mining of uranium ore on Navajo land."