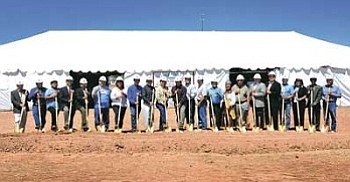 CHURCH ROCK, N.M. - It was a moment many have waited years for; a vision of economic opportunity they hoped would come to fruition. On Monday, June 16, that dream became a reality. More than 200 guests watched the Navajo Nation Gaming Enterprise (NNGE) officially break ground on the very first casino on Navajo land. Navajo Nation leadership including President Joe Shirley Jr., Vice President Ben Shelly and many of the Navajo Nation's council delegates scooped the ceremonious first shovel of dirt that will soon accommodate the casino near the community of Church Rock, N.M.

During his remarks, President Shirley commented on the collaborative effort it took to make gaming on the Navajo Nation a reality.

"This was truly a team effort between many different leadership resources that took a lot of work," he said. "We are very excited about this momentous occasion and I cannot tell you how happy I am to be here today to see this happen."

Sean McCabe, chairman of the Board of Directors, recognized what a unique milestone the ceremony was for the NNGE and acknowledged the economical benefits gaming will bring the Nation.

"Navajo gaming is bringing a lot of promise to the Navajo community and we are honored to work on behalf of our people. I am privileged to represent this effort with an esteemed group of colleagues and professionals," he said.

Several local and regional elected officials and dignitaries took microphone to share their thoughts about the occasion and what it meant to the local community and the Navajo people. Miss Navajo Jonathea Tso sang the national anthem in Navajo, and Gallup Mayor Harry Mendoza spoke at the event regarding the importance of partnership between the Navajo Nation and the city.

"Gallup ... has a long history with the Navajo people," he said. "We look forward to what Navajo gaming will create for all of our communities and we're already engaging in a couple of infrastructure investments to support the casino facility including a neighboring indoor event arena that will accommodate more than 4,000 people and a potential access road loop for easier traffic control."

With construction officially under way, the NNGE envisions an aggressive construction schedule and hopes to open the casino doors in October of this year.