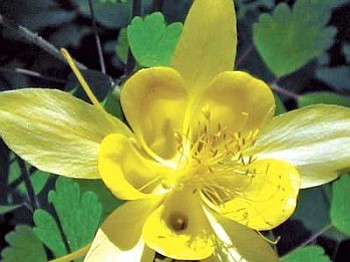 Flowers such as this yellow (or desert) columbine bring color to Horton Creek trail.

Author's note: Exercise and a healthy diet can help ward off diabetes and some other ills. The 100-mile club began on Hopi awhile back to promote healthy lifestyles. As a hiker, I do more than 200 miles per year. This year I hope to hit the 365-mile mark in order to average one mile per day. I know some hikers who average more than 100 miles per week. We each have to decide what is the right amount of exercise for us. To promote exercise, hiking, a love of nature and cool points of Arizona this weekly column will appear throughout the summer.

HORTON CREEK TRAIL, Ariz. - Those looking for cascading clear water, a multitude of flowers and butterflies will find paradise at Horton Creek near Payson. This hike is eight miles and rated moderate by most hikers.

Hikers can park at the Tonto Creek Campground, walk across the road and bridge, find the trailhead across from the campground host's home and then cross down to the dry creek of the trail.

After just a few minutes, hikers will find the cascading stream running alongside the trail. At first the stream appears dry. One couple turned around too quickly thinking that the water was only underground, but don't give up because less than a half a mile in hikers will find the cool running water.

Those wanting to talk while hiking will have to speak loud to be heard above the cascading water. Breaks can be taken at many points along the creek and plenty of shade is offered at the creek as well as along the trail covered by pine and other trees.

The trail eventually goes up as hikers follow an old jeep trail. The cascading water continues to make noise and show itself sporadically throughout the trail.

During the hike last week, grandson Nick Basham and I saw a variety of flowers. Columbine was abundant, monkey flower was sporadic and other flowers seemed like they were everywhere. Most of the flowers were yellow, but an occasional orange flower would show its face.

Just before the four mile marker showing that you're close to Horton Springs you will see the Mogollon Rim jutting out. This is an awesome sight, but keep your eye on the trail. During last year's hike on this trail, grandson Wayne Johnson and myself spotted a rattlesnake on the side of the trail.

Follow the trail to what appears to be the end of the creek, but don't stop here. Go 100 yards east and find the Horton Spring which comes out in the form of a mossy green waterfall. It's fun climbing to the top, but be careful of the slippery moss.

Unlike some trails, there are no mile markers except for at the beginning and end of the trail, so bringing a GPS system would be helpful.

The hike goes up 980 feet in elevation starting at 5,480 feet so bring lots of water.

Famous author Zane Grey had a lodge three miles east of here and used the terrain in some of his novels.

Hikers may think of Grey's cowboys, but it seems like the mossy waterfall could inspire the best from anybody.