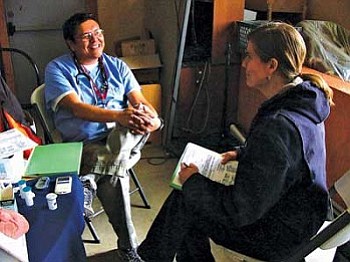 FLAGSTAFF - The South Team of the Winslow Indian Health Care Center (WIHCC) has a goal to chart every child on the Navajo Nation into its database.

This goal was shared by Carolyn Colby, a civilian Public Health nurse employed at WIHCC, who was just one participant in a Health Fair set up at the STAR School, located about 23 miles from Flagstaff. Colby specializes in the dangers of obesity, which places children and adults at risk for diabetes. In between weigh-ins of STAR School students and staff, she explained that obesity impacts every family on the reservation.

"One in every four Navajos has [some] form of [diabetes,] or will contract diabetes," she said. "When we find diabetes in children, they are referred to Indian Health Care where they are connected with dieticians and counselors. We fill out a chart for each person and enter this information into a database allowing us to track them."

As she spoke, fifth and sixth graders cheerfully passed around a quivering model of five pounds of fat. Waylon Curley explained that the tool helped demonstrate to children what it might feel like to carry that weight around.

"We put it in a bag and hang it from kids' shoulders," Curley said. "It doesn't feel like much at first, but it starts to get heavy.

"Our Navajo kids are two percent more at risk for diabetes than the average population. Normal blood sugars run from 70 to 120 in non-Natives, and [from] 70 to 140 in Navajo - this is due to our different lifestyle, more potatoes," Curley continued with a smile. "That's why our numbers are higher. We teach kids that boiling is better, try to eat wheat bread and brown pasta instead of white. Eliminate sugar."

Loren Thomas and Lishua Gishie offered dental health information - along with toothbrushes, toothpaste and dental floss - over a model of an extremely diseased mouth.

Yanavia Haungooah with Native Americans for Community Action's (NACA) Tobacco Prevention Program also demonstrated some graphic models, including a jar filled with tar representing a year's worth of smoking.

Jennie Clark with the Dilkon HIV Prevention Program presented age appropriate information geared for each age group - though she noted that children are aware of sexual issues at a much earlier age than one might expect.

"We are told, and we know that parents are the first teachers. It is important to put a limit on what is seen on television. We've talked to third and fourth graders, and they are aware of what sex is," Clark said.

There are 250-plus reported cases of HIV/AIDS on the Navajo Nation, Clark said, though information gathered from HIV and AIDS-positive patients indicate that there may be as many as 2,000 HIV/AIDS positive people who have not been tested. At least 90 Navajo people have died of AIDS since 1993 when the Navajo Nation first began tracking the disease.

The highest risk group on the Nation is those people involved in substance abuse, Clark continued.

Clark has observed that many HIV and AIDS-positive individuals become alienated by their families and friends.

"Remember to treat them like people," Clark advised. "The support of family and friends is very important to the treatment of this disease. If people are tested while still in the HIV stage, and if they take care of themselves, they can prolong their lives."

"With school-age children, we talk mostly about prevention. It's hard for minors to get HIV, so I teach them that skin is the first barrier against disease. We talk about cuts. A cut leaves a person open for infection, so we talk about keeping cuts clean and covered. We talk about not touching other people's blood, and to stay away from other types of body spills, like mucus."

Sausha Nells, the South Team leader, explained that her team's focus is on school age kids.

"We focus largely on disease prevention for school-aged children," Nells said. "We plan health fairs and do outreach to different school systems - sometimes in the classroom setting. We run five to six health fairs per year, targeting schools that we've not gotten to the year before."

She expressed her pleasure at being able to serve the almost exclusively Native American student population at the STAR School.

"We realized that many of the students at this school are from our community, and we are very happy to come here," Nells said. "It's really neat that we can go just a few miles outside our territory and get to know the students here and ensure that their health care is up to date."

Nells said that she knew that the students would take information that they received during the health fair home with them.

"There is a change in environment and it has a big influence on our children," Nells said. "They aren't being told to go outside and herd sheep anymore. In many cases, they aren't even encouraged to go outside anymore. Families are resorting to fast and processed foods that promote obesity."

Nells added that obesity is not just an appearance issue, but that it is also about one's personal health. "We have been doing blood pressure screenings, and have been finding high blood pressure in children as early as the seventh and eighth grades," Nells said.

When asked what the solution to obesity, type two diabetes and high blood pressure in children was, Nells was concise.

"Exercise and strict nutrition," Nells advised. "Primary prevention - that's where we are gearing our attention. We've got to start with grade school students."