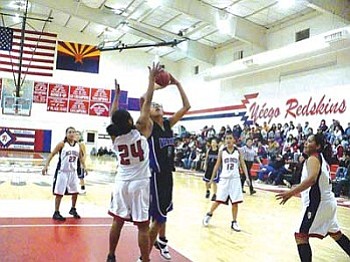 RED MESA - Coming off a big win at Hopi last Saturday night, the Valley Pirates (12-4, 8-2) played the role of spoilers when they won their second consecutive Arizona 2A North Region Conference contest on the road over the Red Mesa Redskins (6-13, 4-5) with a final score of 75-59. The Lady Pirates (8-10, 7-3) won a thriller with only five seconds left on the clock, 50-47, in a rematch against the Lady Redskins. It was Senior Night for the Redskins.

"A lot of emotions," said Pirates head coach George Carmen. "It's hard to win here [at Red Mesa]." Indeed, it appeared that was the case as the Redskins raced out to 7-0 lead behind the scoring of Health Sandoval, Derrick Joe and Orvin Yazzie.

More than two minutes would pass before Craig James would score for the Pirates.

"I wanted to run an up tempo offense," commented Coach Carmen as the Pirates pushed the pace of the game.

Sandoval quickly responded for the Redskins with a steal and a bucket. After the exchange, the Pirates ran off with 11 unanswered points by Tadd Begay, Michael Yellowhorse, Dustin Gilchrist and James. Tyonous Smith and Sandoval closed out the scoring in the first quarter for the Redskins and a 17-13 score.

The second period saw the Redskins' Lemar Tsosie, Ason Alfred, Shawnovan Kaneko, Joe and Sandoval outperform Valley's Garrison George and Julius Mayes as the host Redskins cut the lead to two. Begay's "nothing but net" trey kept the game close for the Pirates. The teams traded buckets entering the half as the Pirates held on to a one-point advantage and a score of 33-32.

"We are being outhustled by the home team," said Coach Carmen entering the third period. "We need to come out with fire and desire." It was a see saw period, with the lead changing several times and the game tied several times.

Valley's Gilchrist, George and James combined for 17 points, only to be countered by Red Mesa's Joe and a host of other Redskins. Joe had nine points, coming off two three-pointers, a basket after a steal, plus being fouled after another steal. He converted on one of two free throws. The Redskins outscored the Pirates 20-17, to retake the lead, 52-50.

Two minutes into the final frame, with the crowd behind the Redskins and the momentum going their way, the unforeseen happened.

"We threw the ball away," Redskins head coach Lee T. Begay said. "We pressured the ball, but we couldn't handle [their] pressure."

The Pirates were able to apply full court pressure, taking advantage of forced turnovers and converting after steals (five straight in a span of two minutes). Yellowhorse scored on back-to-back buckets as Valley took the lead for good and sealed their victory with 6:18 remaining in the final period.

Valley steadily pulled away on the continued pressure of James, Yellowhorse and Gilchrist, scoring off forced turnovers and stretching their lead. The Pirates outscored the Redskins 9-4 in the final minutes of the fourth quarter for the win.

"The game was pretty tough," Coach Carmen said, "We did a better job of communicating in the third and fourth quarters."

The Pirates hosted Rough Rock on Jan. 25. They traveled to St. Johns Jan. 29 and will host Many Farms Feb. 1 and finish out the regular season by hosting Pinon Feb. 2.

Red Mesa will finish their regular season on the road. They played at Rough Rock Jan. 29, and will play at Hopi Feb. 1 and at Greyhills Academy (Tuba City) Feb. 2.

RED MESA - Lashenan Six scored a game-high 18 points for the Valley Lady Pirates in a hard fought win over the Red Mesa Lady Redskins, 50 - 47. The Lady Redskin's Vertrease Untillie hit what appeared to be a game-winning three-pointer with 12 seconds remaining, but it was not to be. Six pushed the ball the length of the court and scored the game winner with just five seconds left on the clock.

The Lady Redskins outscored the visiting Lady Pirates 13-5, behind the scoring of Legenia Wagner, Courtney Tapaha, Ariana Sagg and Nastasha James in the opening quarter. The seniors played their last game of the season before the home crowd. Six hit a game opening trey and Lachelle James added a bucket for the Lady Pirates.

Untillie added eight more points to her team's game high 14 points, Begay and Wagner added a basket apiece for the Lady Redskins, who continued to enjoy a double digit lead as the third period ended. Six continued to add to her game high total with seven points, Miller, Nelson, and Tsosie also scored as the Lady Pirates stayed within striking distance with the scoreboard reading 38-26 at the end of the quarter.

As the final period began, the Lady Pirates - down by twelve points - made their move. They pressured the ball and with their shots falling, the momentum shifted in their favor. The Lady Pirates were able to outscore the Lady Redskins 24-9. Untillie, Wagner, Sagg and Begay, would score nine points for Red Mesa in their heartbreaking loss. Six, who banked her third three pointer of the night plus two scores in the paint, had seven points in the final frame for the Lady Pirates. Six was assisted in scoring by Arlayssa Fatty, Brittney Jones, Nelson, Tsosie, and James for the Lady Pirates.

The Valley High Pirates boys and girls teams were on the road to St. Johns on Tuesday, Jan. 29, and will host Many Farms Friday,

Feb. 1. They will finish the regular season hosting Pinon on Feb. 2.

The Red Mesa Redskins boys and girls finished their regular season playing on the road at Rough Rock Jan. 29. They will be at Hopi Friday, Feb. 1 and at Greyhills Academy (Tuba City) Feb. 2.