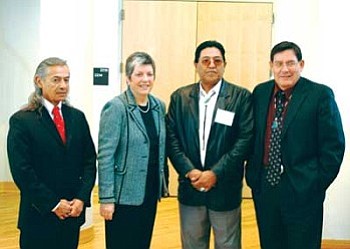 PHOENIX - Several Navajo Nation Council members from the Budget and Finance Committee (BFC) and the Transportation and Community Development Committee (TCDC) conducted a joint work session Jan. 21 to meet with officials from the state of Arizona to discuss issues regarding the state's budget deficit.

The work session was hosted by the Office of the Speaker and the 21st Navajo Nation Council with members of the State Legislature, the Governor's office and other state agencies to gain an understanding of the current budget deficit impacting the state.

The Navajo Nation is particularly interested in the budget implications to state programs, which provide services to the tribe and how it will affect the future of the Navajo Nation.

The Navajo Nation has been working diligently in the past few years to build stronger relationships with the state by contributing more frequently to the dialogue and by bringing state officials closer into the internal processes of the tribe so that an understanding can be reached.

The legislative budget plan was laid out in great detail to the meeting participants, in order to understand the status and threats to funding that it receives. The Navajo Nation was briefed on the status of fund balances, state fund matches to federal funds, grant funds, and application funds that are typically available to the Navajo Nation.

The meeting arose after Navajo concerns surfaced regarding the $870 million shortfall in the state budget, which is partly attributed to the state's slow economy, a decrease in the housing market, decreases in consumer spending, decreases in revenue collection in sales, income tax and corporation taxes, and an overall decline in construction, which provides spendable income and income taxes to the state.

It was explained by Carolyn Atwater, policy advisor to the Senate Democratic Staff that "things will get worse, before it gets better."

In fact, Arizona counties are expected to experience a $20 million cut in their budgets this upcoming fiscal year.

The Navajo Nation may be hit hard with proposed budget cuts also, evident by a proposed $1.7 million cut in funding for Diné College.

Funds for judicial facilities are also at risk. Council Delegate Kee Allen Begay (Many Farms/Round Rock) is worried funds for new court facilities will be cut as well. The tribe heavily lobbied the state and advocated for the Multi-purpose/Judicial Facility in Dilkon in 2007, during which all three Navajo Nation branch chiefs came together to visit Governor Napolitano to ask for her commitment in helping to provide funding for the facility.

In a letter to Governor Napolitano from Speaker Lawrence T. Morgan (Iyanbito/Pinedale), he explained, "it is critical to the Nation that no funds upon which we rely upon be eliminated or reduced. In the event that this is unavoidable, the Nation needs a strategy for addressing such a dire situation. We thank you for ... your ongoing commitment to Arizona's tribal communities."

Marnie Hodahkwen, tribal policy advisor for Governor Napolitano, was at the meeting and explained that the legislative leaders think they need broad cuts to the budget, but the Governor's office looks at the situation differently.

Hodahkwen added that the Governor's office is making sure that "we are not leaving any money on the table," stating that the Governor will do what she can to avoid cuts to the Navajo Nation.

It was explained that even in good years, there are always proposed cuts to Diné College. Despite the cuts, Hodahkwen said, "The Governor will work to fight for this budget."

Sen. Albert Hale encouraged more tribal involvement with the state and said, "If you stand on the outside, nothing changes. We have to take an active role in the budget process."

Hale thanked the Navajo Nation leaders for getting this meeting in place and encouraged a yearly event.

The Office of the Speaker plans to facilitate future meetings to strengthen the working relationships with the states.

For additional information, contact Joshua Lavar Butler with the Office of the Speaker at (928) 871-6384.