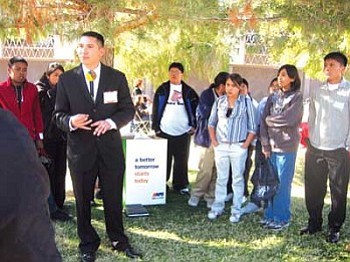 They were recognized during a ceremony when tribal and state leaders shared ideas on what projects they can work together on.

LeAnna Leyva, a 15-year-old sophomore, noted that the tribal leaders spoke about Native culture, water supply and urban sprawl. "I felt the speeches were right on the dot because the cities are getting built too close to the reservations," she said.

Hopi Vice Chairman Todd Honyaoma Sr. and former Hopi Chairman Wayne Taylor Jr. came by to speak with the students and get photographs with them.

Leyva, assistant editor of the Hopi High Bruin Times, said she enjoyed meeting the tribal leaders because they were respectful.

"They listened to what we had to say and they didn't look down on us," she said.

She said the event could be improved by having shorter speeches, and added it was tiring sitting in the chairs too long.

Paul Quamahongnewa, radio student at Hopi High, said it was interesting to see the tribal members giving speeches about the difficulties on their reservations. He noted that many of them spoke about losing their culture.

"This issue is not only a problem in Arizona, but in many [other] places as well. They are worried, as I am, about losing their culture," he said.

Quamahongnewa, a 17-year-old junior, praised the tribal leaders for their ongoing attempts to preserve their culture. He added that he hopes state leaders will listen to the tribal leaders' concerns and help the tribes.

He said the best part of the day was listening to the speakers, but added that the event could be improved by having more tribal leaders speaking out.

Austin Coochyamptewa, another radio student at Hopi High, said the event was fun because it was something he had never done previously. He appreciated that the speakers addressed issues such as water, land and eagle protection.

"They had a lot of important things to talk about," he said.

Coochyamptewa, a 19-year-old senior, said the seating needs to be improved. "They [should] redo the seating because they are too close together," he said.

Mohave Chairman Williams spoke to the students and told them he was asked to run for chairman at a young age and had to ask elders if he should run and if this was the proper time. They told him yes.

Chairman Williams told the students that if they run for tribal council or any position that they should have helping people in their heart.

"Have it in your heart that it's not about you, but about helping your people," he said.

Chairman Williams said whenever he gives speeches that he thinks about how he can help his people.

Williams served in the Marine Corps before earning an AA in business from Yavapai Community College and then earning a BS in finance from Northern Arizona University.

Williams told the students that they will never know where life will take them, but they should be prepared so when opportunities arise, they can take them.

"If you're not ready, then life may pass you by," he said.