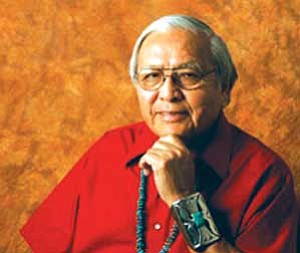 Dr. Zah, an adviser to Arizona State University (ASU) presidents for 13 years, was selected for the honor because of his long and exemplary service to Native American people, to ASU students and faculty and to the broader community, according to ASU Media Relations Assistant Director Sarah Auffret.

He will receive the award at an MLK celebration breakfast on Jan. 28 at the Tempe Mission Palms Hotel.

He is also credited with the creation of the Navajo Nation Permanent Trust Fund in l985.

"I have the highest regard for Dr. Zah," President Shirley said. "He brought $1 billion to our nation."

The President said Zah's farsighted vision for the financial future of the Navajo Nation and the education of its youth has come to fruition today but will continue to bring dividends to the Navajo people for many more generations to come.

Zah has been a key leader to bring Native American students from tribal communities to ASU and helping them succeed.

"Sometimes I think it's not fair to get paid for what I do," he is quoted as saying. "I really love it."

Zah travels up to 1,000 miles a month to tribal communities to talk to students and families about college, and to work with leaders to develop partnerships with ASU.

He frequently speaks to national and local groups about tribal issues and concerns, gives presentations to ASU classes, and meets with students in his office who are having financial or personal problems.

He is credited with helping to double the Native American student population at ASU. He continues to build key alliances with tribal and community groups. He helped create ASU's Native American Achievement Program, a partnership with tribes to provide scholarships, mentoring and advising to students.

Zah has a key role when financial aid and admissions counselors go to the tribal high schools. In February, he and other ASU staff will spend a week on the Navajo Nation talking to students during the day and their parents and families at night.

Born on the Navajo Nation in 1937, Zah left home as a teenager to attend the Phoenix Indian School. He graduated from ASU in 1963. He returned home as a vocational educator, teaching Navajo adults the essentials of the carpentry trade.

Within a few years, he became executive director of DNA-People's Legal Services, a nonprofit legal services program for the Navajo, Hopi and Apache people. He helped set up widespread community education programs and championed native consumer rights. He was elected chairman of the Navajo Tribal Council in 1982. He became president of the Navajo Nation in 1990.

Throughout his career, Zah has made education his first priority. He'll do whatever it takes to motivate students stay in school - counseling them, calling a professor or staff member, or dipping into emergency funds provided by companies or private individuals who want to help.

"Our success doesn't stop at enrolling students, or graduating them," Zah says. "Success is helping the schools prepare them for college, working with families, supporting traditional values and developing scholarship programs so they can succeed. Success is when they go back to their people and become contributing members, working to improve American Indian communities."