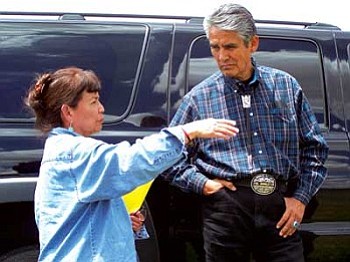 Arlene C. Luther, 59, who was department manager for the Navajo Nation Environmental Protection Agency's Waste Regulatory Compliance Department and employed by the Navajo EPA for 27 years, passed away Sunday, Jan. 6, at University of New Mexico Hospital in Albuquerque after a brief illness.

"Arlene was among the first generation of environmental professionals and she set an incredibly high standard for the people who will follow her," President Shirley said. "She helped create and build the Navajo Nation's Environmental Protection Agency into the pre-eminent Native American environmental department in the country. Her warmth and love of her people was well-known and felt by all who knew her. Her knowledge and experience is irreplaceable, and Native people across the country - even though they didn't know her - suffer a tremendous loss with her passing."

Stephen B. Etsitty, Navajo Nation EPA executive director, said Luther was a leader in the department who helped convince the federal EPA that the land around the Church Rock Mine was on the Navajo Nation, and, so, it had a responsibility to clean it up. That cleanup is progressing now.

"She fought for over 10 years on the issue because everyone kept telling the Navajo Nation that it wasn't Navajo trust land," he said. "But it turned out it was, and the federal government had a responsibility."

Etsitty said Luther amassed an enormous amount of knowledge, expertise and respect in the field of waste management and environmental regulatory affairs. He said she helped to establish the regulatory capabilities of the Navajo Nation EPA.

"She didn't take no for an answer," he said. "She kept working on the issue until the issue was crystal clear. And that's how we got to where we are now.

He called her "the epitome of a public servant" who was highly regarded by the staff she worked with.

"She worked 10-hour days," Etsitty said. "She was always ready to respond to hazardous spills and go out across the Navajo Nation to where they occurred. She ensured that people responded in a safe and effective manner."