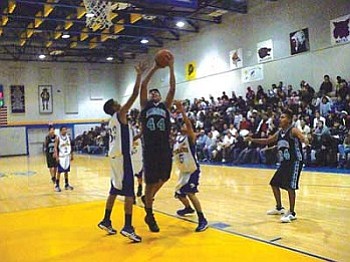 SANDERS - The first time they met the Valley High School Pirates from Sanders, the Greyhills Academy Fighting Knights from Tuba City etched one in the win column in the Arizona 2A North Region conference with a five point 66-61 win over the Pirates. A month later, the two teams would play in a rematch before a standing room only crowd.

Last Friday night in boys high school basketball action, Greyhills Academy pulled out a four-point win over Valley with a score of 50 to 46. With this win, the Knights improved to 11-8 overall and an important 7-1 conference record to stay tied with the St. Johns Redskins atop the 2A North Region Conference. The Valley Pirates drop to 14-5 for the season and 6-2 in the 2A North Region conference.

Kevin Nez of Valley brought the partisan crowd to its feet with a bucket off the glass after the opening tip only to see the Knights outscore the host Pirates 12 to 2 in the next seven minutes of the quarter. McCantle Jim, Everson Chee, Colin Tom and Travis Willie combined for 12 points in the first quarter. With 44 seconds left, Michael Yellowhorse answered with a driving lay in as the quarter ended with the Knights leading 12 to 4.

"[We were] up by 10 in the first quarter, [but] they applied some pressure," said Pat Boone, head coach of the Knights. "They were composed and stayed focused."

With 6:56 left in the second quarter, Darren Dejolie found Jonathan Boone in the corner and he connected with a 12-foot jumper to retake the lead.

"I like to move the ball around," Boone said. "I think of my teammates first."

Ryon Baloo and Yellowhorse gave some hope to the capacity crowd with brief run, scoring 6 points. Then, it was Jolie again. This time he connected with Harry Gamble and a reverse lay up. The teams traded buckets for the remainder of the quarter with the Knights still in front, 27-23.

Coach Boone stated, "During the halftime conference, I told them [to] keep fighting. We are on their home turf and a home crowd. Stay focused and concentrate."

They did stay focused and continued to lead with the upset-minded Pirates applying constant pressure and chopping away at their lead. With 4:50 left in third quarter, Yellowhorse scored for the Pirates on an outlet pass from Austin Gilchrist, as he moved along the baseline. Immediately following the inbound play, Jonathan Boone, while driving the lane, found Ty Jay Nez wide open. He added to his game high seven assists with an easy bucket by Nez as the Knights led 33 to 29.

"Keep attaching the baskets," shouted Coach Boone from the sidelines.

Travis Willie went to the glass again and again until he scored off errant shots by his fellow teammates to take another four point lead. The Pirates continued to apply full court pressure to get back into the game and a possible lead. They forced turnovers and stole several passes but were not able to convert until Julius Mayes and Yellowhorse scored on back-to-back baskets, cutting into the lead by three points, 38-35, as the third quarter ended.

"Gotta be smart," said Coach Boone as he sent the boys out for the final quarter. He was referring to the turnovers caused by the full court pressure and misled passes.

Early in the period, the Knight's Chee hit the game's first and only three-pointer to take the lead, 42-37. The Knights and the Pirates traded buckets early in the quarter and midway thru the final stanza.

The Pirates, sensing an upset with the home crowd behind them, forced several turnovers and continued to erase the lead that the Knights enjoyed throughout the game.

As the game clock was winding down, the Pirates' Craig James, Gilchrist and Yellowhair scored five unanswered points to tie the game at 44 with 2:45 remaining to play. Back-to-back steals led to scores by the Knights' Jim and the Pirates' Yellowhorse, tying the score at 46 all.

The Knights spread the floor with seconds left. Dejolie, Nez and Jim all touched the ball before. Willie scored off the window and after a missed three-point attempt by the Pirates, the Knights called a timeout and set up the game's final play.

The Knights' Jim was fouled on the inbound play and calmly made the trip to the charity stripe with the game on the line. Jim made both free throws and earned the hard-fought win the for Greyhills Academy as the clock ran out with a final score of 50 to 46.

"We made the free throws-the ones that counted-at the end," Coach Boone stated.

"I give my kids all the credit, [especially] coming off a loss to crosstown rival Tuba City Warriors. The kids were down, [but] we played real hard," Coach Boone said.

"I give [the] Pirates a lot of credit, they played hard," Coach Boone concluded.

The Knights played Saturday night at home and were victorious over the St. John Redskins with a final score of 58 to 53. They improved to 12-8 overall and an important 8-1 conference record and are now the 2A North Region Conference leaders. The Knights played the Hopi Bruins on Jan. 22 at home.