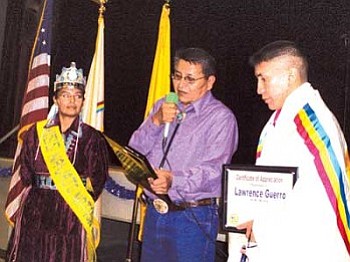 Navajo Vice President Ben Shelly, with Miss Navajo Nation Jonathea Tso to his right, presents the Navajo Nation Presidential Plaque of Honor to returning soldier U.S. Army Specialist Lawrence Guerro of Alamo, N.M. Guerro was injured by a roadside bomb while on patrol in Baghdad, Iraq in May 2007 (Photo by George Hardeen, NN-OPVP).

During a mission in Baghdad, Iraq in May 2007, Guerro's armored unit was hit by an improvised explosive device (IED).

Guerro, who joined the Army in October 2005, suffered the loss of most of his right leg. He was given a customized titanium-made leg and has been completing physical rehabilitation since then.

Vice President Shelly thanked Guerro's wife, Karrie Guerro, and their family for the support they gave him and for the sacrifice he endured.

On behalf of Navajo Nation President Joe Shirley Jr., he also thanked Guerro for his "courage, commitment, commitment on the frontline, and his willingness to give and bear the ultimate sacrifice so that freedom will always exist on the land and the Diné Way of Life will be protected."

The Vice President assured the Alamo community that the Navajo Nation government is working to assist those who served in the armed forces, especially those returning from warfare in Iraq and Afghanistan.

"A lot of our veterans don't have homes, don't have running water and electricity," he said. "Why is it we are not getting all of that? Yet they go to service and defend a nation. And they come back physically harmed."

"We are doing something on behalf of veterans," Vice President Shelly said. "You are not forgotten, all of the veterans from the community of Alamo."

Vice President Shelly encouraged Guerro to use his skills and to continue to be independent and self-sufficient.

"When you get out of service, use what you learned in the service," he said.

"Give what you were taught. We want you to start to make use of that knowledge. We need to do something for ourselves to support one another, and I am hoping that you do come back and that you add input into your community."

Miss Navajo Nation Jonathea Tso thanked Guerro as a relative for his service. She shared a traditional Navajo song that "speaks about the prayers and the good life we want to live."

For more information, contact executive assistant Sherrick S. Roanhorse in the Office of the Vice President at (928) 871-7003.