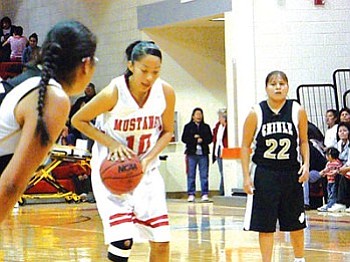 Robin Curleyhair scored at will, scoring ten points for the Lady Mustangs. Additionally, Ingrique Salt, Crystal Todachine, Twayla Sullivan, Bradley Nash, and Nicolette Parrish all scored points, resulting in a first quarter lead with a score of 16 to 6. Chinle was led by Courtney Noberto and Tia Gorman in the opening frame.

Noberto and Gorman combined for 13 points as the Lady Wildcats outscored the Lady Mustangs 17 to 10 and come to within three points with a score of 26-23.

Robert Nash, head coach of the Lady Mustangs stated, "I told them, we have to play better defense. That's exactly what we did in the third quarter and we started pulling away."

Todachine, Curleyhair and Chantel Kescoli all played outstanding defense and outscored the Lady Wildcats 15-9, and pulled away with a nine point lead, 41-32. "During the break, we talked about trading doubt for beliefs, believing in one another," said Chinle head mentor Darrell Clauschee, "We [committed] numerous turnovers and missed several free throws and they (Lady Mustangs) took advantage of that."

The Lady Mustangs' Ingrique Salt led all scorers in the final quarter. Numerous Lady Mustangs also contributed points as they outscored the Lady Wildcats 22 to 12.

"As long as we win, its OK,' said Nash, "It doesn't get any easier now, everyone is tough in our conference, we have to be ready to play."

The Mustang's remaining games are all conference contests. They traveled to Tuba City on Jan 8, will host Window Rock Jan 11, and will then travel to Holbrook Jan. 12 and to Ganado Jan. 15.

The Lady Wildcats played their next game on the road at Window Rock on Jan. 8. They will host the Ganado Hornets in a rematch on Jan. 11 and will then travel to Winslow on Jan. 15.