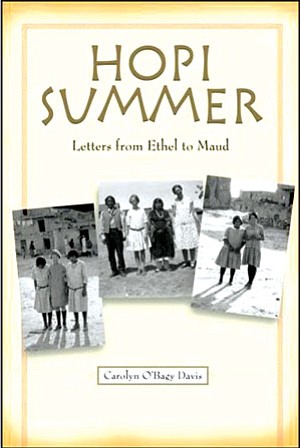 The possibility that a New England woman and a Hopi woman forming a meaningful friendship in the late 1920s would have been almost impossible. Nonetheless, Maude Melville and Ethel Salyah Muchvo met during a short visit to the Hopi reservation made by the Melville family 80 years ago. Following an eight-day visit, the women from extremely different worlds carried on a written correspondence for a decade following their chance meeting.

This friendship-and more importantly a pictorial view of life in Hopi villages at the turn of the 20th Century-is chronicled in Carolyn O'Bagy Davis' book, Hopi Summer: Letters from Ethel to Maud.

As the title implies, the written documentation of this friendship is largely one-sided, from the viewpoint of Ethel Salyah Muchvoh. Also available were the memoirs of the trip written by Maud Melville.

Davis chanced upon 13 of Carey Melville's photographs published in The Journal of Antiques and Collectibles during a visit to Massachusetts in 2002. Davis had just published her book, Hopi Quilting, which included photographs taken by Florence Crannell Means, an author of Christian-themed books from that era. Davis was amazed and intrigued to see that Means' photos were nearly identical to the Melville photos.

"From her journals, it was apparent that Florence visited the Hopi villages at First Mesa during the same weeks that the Melville family stopped to camp at Polacca," Davis said.

Davis admitted a fascination with the photographs, and made numerous copies to share at Hopi as she began the work of writing Hopi Summer. The pictures were received with excitement, and Davis garnered support from tribal members and the Office of Cultural Preservation to produce the book.

On Jan. 29, 1927, Dr. Carey and Maud Melville and their three children, Maud (15), Robert (13), and Martha (9), left Worcester, Mass., in a brand new Model T Ford towing a fully-stocked trailer. Living out of a trailer full of camping supplies, food and clothing would have been a drastic change from the lives they were used to, but nonetheless the family undertook the journey with enthusiasm.

This richly illustrated book features a map marked by the Melvilles tracing a route that would intimidate many travelers today despite faster vehicles, better roads, bridges and modern amenities such as restaurants and motels. Approximately 60 photographs capture details of the journey and of life on the Hopi reservation in the early 20th century.

The photos, taken by Carey Melville, were developed along the road. They include scenes of the family pushing the Model T (affectionately named "Hubbub") across muddy river crossings, cruising unimproved dirt roads, and resting and eating in primitive camping areas.

A visit to the Grand Canyon was one of the highlights of the trip, and because of the relatively close proximity of the Hopi Reservation, the family planned to visit there for a day or two. After meeting "Chief" Joe Secakuku at his trading post at Two Guns on June 20, the Melvilles made camp at Polacca the following day. There, they met Wilfred and Ethel Salyah Muchvo among other Hopi. Ethel and Maud were especially attracted to each other. The visit lasted eight days.

Under the tutelage of Ethel, the Melvilles tried their hands at pottery making. The family saw sights that most people could only imagine-amazing desert vistas, young eagles tethered on roof tops, and women going about their business of making pottery and baskets, cooking, and sewing.

The Melvilles were also witness to another notable event in Hopi history by paying a visit to the home of Nellie Quamalla, who was about halfway finished with her legendary basket. When finished, the basket measured four feet high and three and a half feet across, requiring 64 coils. Quamalla's contribution to her community is still mentioned to young Hopi children as inspiration.

There are two photographs of the basket in the book-one by Carey Melville showing Quamalla at work, and another taken later by an unknown photographer on the deck of Pavatea's trading post.

After leaving, Maud's interest in her journal seems to have faded-but she kept the letters she received from Ethel over the next decade. Maud's letters to Ethel have not survived to anyone's knowledge. Davis theorized that with paper being a rare commodity at Hopi, Ethel may have used Maud's letters to wrap items or to start fires, especially given the shortage of storage place people had available to them in the villages.

The picture painted by Ethel of her life is very tragic-therefore Ethel's own account of her activities and hopefulness are poignant. The existence of letters from a traditional Native American woman from the early 1900s is extremely rare and it would have been very interesting to read what words Maud would offered to her Hopi friend, how she would phrased to comfort a woman facing an extremely different life full of tragedy and illness-but also a life of blessing and joy.

On Nov.24, 1937, Ethel wrote her last letter to her friend-trachoma had slowly robbed her of her eyesight, and she could no longer support herself by making pottery.

In 1938, Bertha Kirschke, one of the missionaries, also penned her last letter from the mesas. Maud and Carey made a final visit to the mesas in 1953 and Ethel and Maud spent time together for the last time.

In her later years, Maud offered her grandson, Robert Arnold, the family's extensive Hopi collection. Arnold felt the collection to be far too valuable, and after discussion with the family, 181 items were donated to Wesleyan University in Middletown, Conn. where Arnold had attended.

As Carolyn O'Bagy Davis points out in the conclusion to her introduction to Hopi Summer, "Carey Melville's photographs are infused with a sense of the vast spaces of the West and the enduring strength of the Hopi people. They are a treasure, a gift that stretches across cultures and through the years."