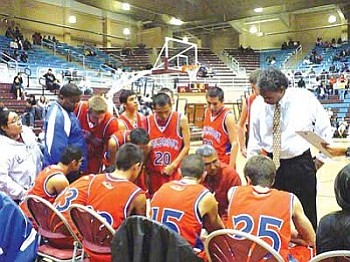 With the Holbrook Roadrunners leading 38 to 35, Holbrook’s Raul Mendoza calls a time out, to regroup and continue (Photo by Anton Wero/NHO)

GANADO - "Someone played defense," said Ganado Hornets head Boys coach Richard Beverly, referring to the low scoring affair as the Holbrook Roadrunners won on the road with a score of 49 - 40 at the Ganado Pavilion. The Roadrunners are now 2-1 in the 3A North Conference and 12-5 for the season.

The fan's first game of the New Year at the Ganado Pavilion was "pretty good," according to Holbrook head coach Raul Mendoza. Mendoza continued, "We wanted to get a good start." The Roadrunner's Kyle Cummings started the first quarter with a couple of baskets and scored eight points in the first quarter, giving the Roadrunners a 12-9 lead with contributions from Juan Quintana and Victor Paz. The Hornet's Cody Tsosie then scored a couple of buckets. Kameron Bluehouse and Orin Joe also scored in the opening quarter.

An 8-0 run by the Hornets started the second quarter with scoring from Bluehouse, Cody Tsosie, Colin Tsosie, and Wesley White giving them a 17-12 lead. Cummings then answered with a trey and a driving deuce, tying the game at 17 with 2:07 left in the quarter. Both teams played evenly, entering the break. "We kind of struggled there in the first half," said Mendoza as the half ended with the Hornets leading with a score of 21 to 18.

"We got good guys, they work hard," said Beverly. "During the break, I tried to get these guys to believe in themselves, I believe in team [play.]"

A basket by the Hornets' Cody Tsosie started the second half, but the Roadrunners ran off a 6-0 run with a trey by Juan Quintana and four points from Tatton Long. Colin Tsosie continued scoring all of the Hornets' points in the third frame with eight points, entering the final quarter with a one point advantage.

In fourth quarter, the Hornet's Cody Tsosie scored six points, but again, the Roadrunners battled back with scoring from Dustin Gonzales, Rex Self, Long and Paz, to tie the game at 35 with 4:30 left in the game. Then Jerel Dixson took over, scoring ten of the Holbrook's final fourteen points,

"That kid (Dixson) really hurt us going to the line," said Beverly. It was almost all Dixson as he pushed the ball through the heavy traffic, going to the charity stripe and making eight of 10 free throws, and finally two off the glass with 20 seconds left in the game and a tough road win for Mendoza and the Roadrunners.

Kyle Cummings had 13 points for the Roadrunners and Jerel Dixson contributed 10 points. Holbrook will host three 3A North Conference games, beginning with Tuba City on Jan. 11, Monument Valley on Jan.12 and Window Rock on Jan. 15. They will then go on the road to Chinle on Jan. 15.

Cody Tsosie led all scores with 16 points in the game, followed by Colin Tsosie with 13 for the Hornets. The Hornets' remaining games are 3A North Conference contests. First, they were on the road to Tuba City Jan. 5 (Results not available at press time). They hosted Winslow on Jan. 8 and will travel to Chinle on Jan. 11 and to Window Rock on Jan. 12.

The host Lady Hornets of Ganado (2-0, 14-1) won convincingly with a score of 66 to 27 over the Lady Roadrunners of Holbrook as basketball action resumed in the New Year.

"We started out slow," said Dale Larson, head coach of the Holbrook Lady Roadrunners as the Lady Hornets took a 12 - 4 advantage in the first quarter behind combined scoring by Janassis Taliman (6), Shandiin West (4), and Leandra Lynch (2). The Lady Roadrunners were led by April Lester and Deidra Long, with a bucket apiece.

The second half was more of the same as the Lady Hornets outscored the Roadrunners 17 to 5. Lynch had a trey combined with three buckets. West and Leandra scored six points each. Baldwin and Lester had a bucket apiece as the Lady Roadrunner fell further behind at the end of the third period, trailing by a score of 49-18.

Not looking back, the bench got into action with the Lady Hornets as five different players scored, steadily pulling away. The Lady Hornets had Cory Slim, Jasmine Taliman, Jennifer Salabye, Lisa Kirk and Rhonda Curtis contributing to the scoring in the final period with a total of 17 points. Samantha Yazzie, Kenisha Lee, Goldtooth, Lester and Long scored nine points in the final quarter, as the Lady Hornets won big.

"We are very young, [with] not much varsity experience," Larson concluded "We played a tough team. If we cut down on our mistakes, we will be competitive, down the road (this year)."

The Lady Hornets were led by Leandra Lynch with a game high 18 points, followed by Shandiin West and Leandra Mark with seven points each. The Hornets' remaining games are 3A North Conference contests. First, they were on the road to Tuba City on Jan. 5 (Results not available at press time). They hosted Winslow Jan. 8 and will travel to Chinle Jan. 11 and to Window Rock Jan. 12.

April Lester scored 10 points for the Lady Roadrunners. The Lady Roadrunners will host three 3A North Conference games, beginning with Tuba City on Jan. 11, Monument Valley Jan. 12 and Window Rock Jan 15. They will then go on the road to Chinle Jan. 15.