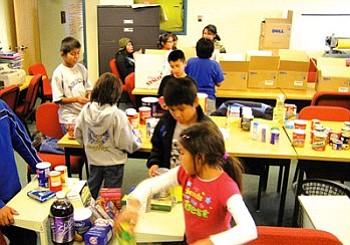 MOENCOPI-Moencopi Day School (MDS) students collected over 1,500 pounds of food during their Christmas food drive, which was sponsored by the MDS Student Council. Sixth grade representative Charlene Dodson, chaired the project and she and other student council representatives/committee members pitched the project to each class.

With the promise of a pizza party for the classes that collected the most food, the race was on. Students brought everything to make a good Christmas dinner and more-stuffing mix, canned vegetables, potatoes, cranberries, cake and pie mix, flour, and even pickles. After all, what's a Christmas dinner without pickles?

The initial plan was to donate holiday food baskets to a just a few families. However, with the massive amount of food donated, the student council was able to make 14 food baskets with boxes and boxes of canned food left. The canned food were donated to the St. Jude's Food Bank in Tuba City. Student council advisors Ms. Teller and Mr. Talas along with school counselor Ms. Hongeva delivered the food baskets to families in Moencopi and Tuba City. The recipients expressed their gratitude and relief.

MDS Principal LeRoy Shingoitewal stated, "I'm very proud of the students for their commitment to helping people in need during this time of year. Go Panthers!" Eugene Talas, student council advisor, expressed similar praise. He stated, "I am very proud of the student council members and all the students who donated to this worthy project. I'm also grateful to the teachers and staff who donated hams and turkeys for the food baskets. The students far surpassed my goal and they proved to themselves that they can exceed their potential with teamwork. We hope to make this an annual tradition."