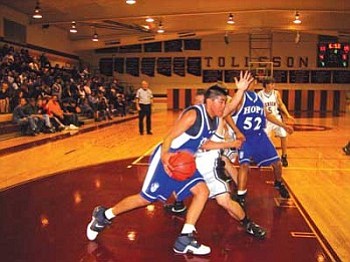 Hopi High’s Roper Crook drives to the basket. Despite their efforts, the Bruins lost to Greyhills Academy during the regional tournament (Photo by Stan Bindell/NHO).

Greyhills beat Hopi, 57-44, in the semi-final round before Hopi beat Valley-Sanders 81-78 in the consolation game to claim third place. The games were played at Greyhills High School.

Willie poured in 14 points in the third period as Greyhills led 38-33. Big X countered with 11 for Hopi to keep the Bruins close.

Willie poured in eight points in the final period as the Knights grabbed the victory. Big X countered with six points for Hopi.

In the consolation game, Big X and Wartz topped Hopi with 20 points apiece, Honyaoma fired in 16, Curtis pitched in with 13, Roper Crook scored a half dozen, Trevor Crook netted four and Paul Quamahongnewa had a deuce.

Big X poured in eight points and Wartz added five as Hopi led 45-44 at intermission. Alez countered with eight points for the Pirates.

Honyaoma, Curtis and Wartz scored five each in the third period as Hopi led 64-60. Yellowhorse countered with 10 for Valley.

Big X and Wartz netted five each for the Bruins in the final period as Hopi grabbed the victory. George kept the Pirates close with six points.

Coach Baker said the best part of the season was qualifying for the state playoffs.

Coach Baker coached the boys basketball team for the first time in ten years. In between, he coached girls basketball and junior varsity teams.

"The most challenging part ... was to get everybody to believe in my system," he said.

Coach Baker said two or three of the seniors this year are capable of playing basketball on the junior college level.

Coach Baker reminds his players that academics come first and that tutoring is available every day to help them.

Coach Baker also warns them to stay away from drugs and alcohol.

"I remind them that if they need to think twice about doing something that it's wrong. I tell them, 'Don't get yourself into a situation where you have to defend yourself,'" he said.