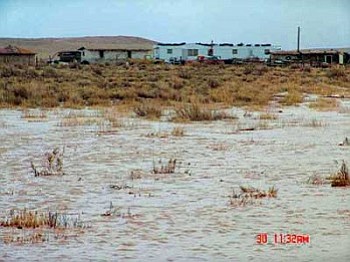 A virtual ocean of floodwater stands just yards from a home site at an unidentified location in the Bird Springs Chapter. Many chapters in northern Arizona — including those in Navajo County — have been hit hard by recent heavy snowstorms and the resulting snow melt caused by warmer temperatures (Photo by Lt. Emerson Lee, NPD).

HOLBROOK - An afternoon that was intended to provide county leaders with an assessment of road conditions in northern Navajo County turned into a series of rescues for Supervisor Percy Deal, County Manager Jimmy Jayne, Public Works Director Dusty Parsons and other staff.

The trip north was scheduled last Wednesday, Feb. 13 at the request of Deal, whose district has been inundated with rain and snow for the last several weeks, leaving dozens of roads impassable and stranding hundreds of families. The poor road conditions prompted the Board of Supervisors to declare a state of emergency earlier this month.

"This is a desperate situation," Deal said. "There are many families who are unable to leave their homes to obtain basic food and medical supplies. If the bad weather continues, the situation will get far worse before it gets better."

Deal's words were confirmed by the group's observations throughout the day. Beginning in the Hard Rock area of District 1, Deal guided Jayne and Parsons to a number of locales where water from melting snow has washed away portions of roads near residential areas. In one particularly dangerous spot, running water has undermined an entire roadway, leaving about a 15-foot drop. Further complicating the situation is that county residents often have no alternative routes to or from their homes.

"I was shocked by what I saw today," Jayne said. "Even though these roads are the responsibility of the federal government, the people who use them are residents of the county. We have an obligation to provide assistance to the degree that we are financially and legally able."

In addition to surveying roads throughout Deal's district, county officials also met with the principal of the Rocky Ridge School north of Hard Rock. In a plea for help, the principal explained that she has been forced to cancel school because of the large number of students and teachers stranded by impassable roads. "Any help you can provide would be greatly appreciated," she said.

Parsons committed to sending several road crews north to assist with the road efforts, in addition to the County resources that have already been allocated.

Following their visit to Rocky Ridge School, Deal and his group proceeded to survey a number of roads between Hard Rock and Pinon. Along the way, they observed a small compact car driving in the opposite direction towards the road with the 15-foot drop. Deal waved his arms to warn the driver, but the car failed to stop.

Less than an hour later, word was received that the motorist had become stranded. Deal, along with Jayne, proceeded to the spot and successfully towed the grateful driver's vehicle out of the mud and on to dry ground.

It would be the first of four successful rescues that day by Deal and Hard Rock Chapter Coordinator Harry Begay. The other rescues were performed on the road leading from Hard Rock to Pinon. One of those rescued was attempting to drive to Pinon to obtain medical supplies for her elderly parents. Another driver had been stuck in the mud for over an hour with his wife and two young children.

"Unfortunately, this is typical in our area when the roads get bad," Deal said. "Motorists aren't used to roads in such poor conditions and often have to call for help."

The day concluded with a visit to Larry Wallen, Superintendent of the Pinon School District to discuss how the road conditions are affecting the district. Wallen reported to the county officials that he has had to cancel several days of school because approximately 1,800 of the district's 2,000 miles of bus routes are on dirt roads. On Tuesday alone, seven Pinon school buses became stranded, forcing the district to employ four-wheel drive vehicles to get students home.

Wallen acknowledged the assistance Navajo County has already provided and asked for more.

"We are shut down," he said. "The roads have made it impossible for us to hold classes. We have already cancelled ten days, pushing our school year far into June."

In response to Wallen's request for help, those in attendance made a call to the Navajo Nation Department of Emergency Management to request that resources - including road graders and dozers - be allocated to northern Navajo County to repair roads and restore accessibility for local residents. Wallen, Deal, and Jayne also called the Navajo Nation to ask that they contact the State of Arizona to request that Governor Napolitano declare a state of emergency so that state resources can be provided to the area.

"This problem is too large for just the county or BIA to solve," Deal said. "I'm hopeful that the Navajo Nation and BIA will join Navajo County in allocating the resources and personnel necessary to improve conditions in this area. Working together, we can make it happen."