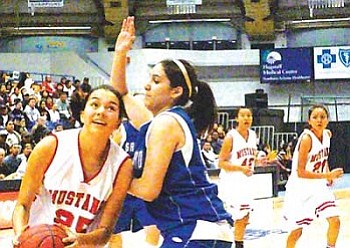 Monument Valley’s Bradley Nash in action against the Safford Lady Bulldogs’ Bea Villalba in state tournament opening round action last week. Monument Valley went on to defeat Safford with a final score of 68 to 49, earning a playoff berth in Thursday’s semi-finals (Photo by Anton Wero/NHO).

FLAGSTAFF - The Lady Mustangs of Monument Valley joined the Ganado Lady Hornets and Winslow Lady Bulldogs as qualifiers for "February Frenzy," the 2008 Arizona State 3A Basketball Championships at the Jobing.com arena in Glendale with a convincing win over the Safford Bulldogs, 68 - 49.

"I missed only one final four game once in my 18 seasons of coaching," commented longtime head coach of the Lady Mustangs, Robert Nash when asked about the biggest event of the year for the basketball fans of 3A North, the annual AIA State tournament in Glendale.

To advance to the quarterfinals, the Lady Mustangs defeated the Snowflake Lady Lobos in the opening round of play with a score of

Ingrique Salt, Kayola Sullivan, Bradley Nash and Robin Curleyhair pooled for 15 points and the game was tied four times in the first quarter before Monument Valley took control of the game after a brief time out. "We made some adjustments early," said Nash, adding "When we play a team that we don't play on a regular basis, we have to make some adjustments to their style of play."

Cassie Crotts, Jessica Hancock, Kathi Alvarado and Bea Villalba scored for the Lady Bulldogs as they found themselves in a four-point deficit after the first period, 15 - 11.

Monument Valley went to a full court press, found their rhythm and erupted for 14 as a cast of Lady Mustangs scored and took the lead, which they would not relinquish. Safford would only score nine points as Monument Valley extended the lead 29 - 20 to end the first half of play.

As the second half began, the Lady Mustangs were in control and were able to utilize the bench. The man-to-man defense worked for Monument Valley with the continuum of applied pressure that produced forced turnovers. The Lady Mustangs capitalized on the turnovers with seven different Mustangs scoring 22 points to 10 points for the Lady Bulldogs. The Lady Mustangs continued to lead 51- 30 at the conclusion of the third period.

Monument Valley outscored the Lady Bulldogs in the fourth and final period 19 to 17. Curleyhair and Nash combined for 14 points and the bench added five more to end the season for the Lady Bulldogs with a final score of 68 - 49.