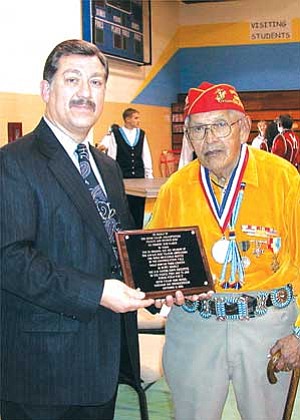 A representative of River Valley High School in Marion, Ohio, presents Merill Sandoval with a plaque and medal on Veteran’s Day (Photo courtesy of Sandoval family).

TUBA CITY, - Merril Sandoval often told family members that his experiences as a Code Talker in Iwo Jima was the defining moment of his life-but that his best career was raising his children.

Sandoval, a Marine Corps Code Talker, was in declining health for the past year and traveled to Phoenix for tests, fully expecting to return home to his family the following day. However he passed away on Feb. 9.

Merril was born to Julian Sandoval and Helen Smith on April 18, 1925, in Nageezi, New Mexico. His clans are Naasht'e 'zhi' Tabaaha Dine'e (Zuni-Edgewater Clan) born for Tl'aaschi'i (The Red Cheek Clan). After the loss of Helen, Julian remarried and between the two marriages, produced 15 children.

All remembered Merril for his humble, simple outlook on life, his generosity and even temper.

Merril's desire to join the Marine Corps was fueled by his brother Sam's enlistment in May, 1942-however his father was reluctant to let the younger boy join until the following year when Merril turned 16.

"'Go, get your brother and bring him home,'" Gary Sandoval, Merril's oldest son, quoted Julian Sandoval. "But the two never did see the other."

The Sandoval brothers, like other Navajos enlisted in the Code Talker training program, attended basic training in San Diego before radio communications training at Camp Pendleton, sealing his military career as a Code Talker-Merril served the Second and Fifth Marine Divisions.

In August 1944, he was assigned to Camp Tarawa, Hawaii, and embarked on a Pacific Island-hopping campaign in January of 1945. On February 29, 1945, Merril was part of the third wave at Iwo Jima.

Merril remembered this in his memoirs.

"I was on guard duty the morning of Jan. 19, 1945. It must have been around five or six o'clock when I saw what looked like lightning over the top of this little island. Our ship was heading in that direction. It wasn't too long after that when our commanding officers ordered us to get ready to disembark. I soon found out the island was Iwo Jima."

Merril left Iwo Jima to return to Camp Tarawa in March of 1945, boarding another ship for another month and a half of island hopping, with the intent of invading Japan.

Merril's memoir entry for August 1945 reveals another part of history.

"We were heading to the southern part of Japan when we heard the atomic bomb was dropped the first time, and then a second time. Next, we heard the Japanese surrendered."

Merril continued to Japan, where he served as part of the occupation force for six months.

Upon his discharge, Merril sought to earn his high school diploma. He began his junior year at Sherman Institute in Riverside, Calif., and graduated from Albuquerque Indian School. He went on to Haskell Indian Vocation School in Lawrence, Kan. He spent over 15 years working as a machinist, and then decided to return with his family to the reservation. Merril served with the Navajo Tribal Police for three years, and then moved through the ranks of DNA Legal Services as a court advocate, retiring in 1997.

After retirement, Gary said, his father continued up until the last couple years of his life as a volunteer private counselor and a Social Security Income interpreter-as well as an interpreter for the Hopi Tribe.

Gary shared some of his father's humor with the crowd.

"'Nah, I fell out of Dad's Model T and cut my head on the running board,' Dad said. We still aren't sure about the scar," Gary laughed.

Gary went on to describe his father's travels, presenting his life experiences to schools and other groups-including Merril's consultation on the film, "Wind Talkers."

"Following the premier of 'Wind Talkers' in Phoenix, Dad was asked to speak. He was asked 'Did you like the movie?' 'It was okay,' he replied. They asked him about the depiction of the war scenes, and he answered, 'It was all right.'"

It wasn't until someone asked how well he'd been protected that Merril warmed to the subject, according to Gary.

"At one point, he and another Code Talker, William Price-two Navajo boys dirty from life in the field, decided to take a walk during a loll in the fighting. Well, they walked right into an artillery group who thought they were Japanese. They were taken to command and interrogated, while a certain sergeant threatened to kill a lieutenant if they didn't release the Code Talkers-my father told them this story, they said, 'if they were protecting us so well, why did our guards let us get captured?'"

Gary said that his job takes him all over the world-last year he flew over 75,000 miles-but he has always been afraid to fly. Not his father.

"When Dad flew, he was like a kid. He always wanted the window seat," Gary said. "Once, we flew through Jackson, Miss., and went through a tornado. There was lightning everywhere. My wife and I were holding hands, but Dad was looking out the window. 'Ooooh, look at the pretty lightning!' he kept saying."

Gary told of how his father had waited almost his entire life to apply for a Veteran's Affairs home-and how one day Merril called him to tell him that two semi trucks had dumped the parts of the house in the yard.

"'What am I going to do? I'm 80 years old, how can I build a house?' Dad said. I came over and helped unload the trucks, and then we hired private contractors to help put up the foundation," Gary said. "A reporter wrote a story about this, and through this we met a savior-Robert Bowman and his sons Justin and Craig-who volunteered to build his house free of charge."

Earlier in the parking lot, Bowman recalled his first meeting with Merril Sandoval.

"He reached across the table and took my hand, and told me, 'I just want a home to leave for my family.' Well, he got that," Bowman said, his voice heavy with emotion.

Gary also thanked his friend, Kevin Blakeney, for making the journey from Bay Springs, Miss. Blakeney had hosted Merril for the past five years during the annual veteran's celebration there.

"He was a great dad," Gary concluded. "I miss him, but I know he's in a good place-with God and with Marines. Thank you Dad, you're with God now."

Merril's brother, Bert Sandoval, thanked the community of Tuba City, where Merril lived for 44 years, for taking good care of his brother. He went on to explain that the family, including Lorraine, were never aware of what Merril and Sam had done in the war, until after the Code Talkers were declassified in 1968.

"I didn't even know what a Code Talker was until Sam told me," Bert said.

"Today is the day that I say a final farewell to my brother, my dear brother," Sam Sandoval said, remembering his brother as humble, intelligent and gracious.

"As a warrior Merril has traveled through the world. Merril has done his duty," Sam said, and advised his survivors that memories are forever.

Following the service, the family traveled down State Highway 89 to Flagstaff, escorted by the Navajo Nation Police Department. Merril was laid to rest at the veteran's section of Flagstaff's Citizen's Cemetery with full military honors, including a 21 gun salute and "Taps."

Afterwards, the family gathered to share a meal and remember their beloved father, grandfather, uncle, cousin and friend-and though tinged with sadness, laughter rang out at happy memories.

Randi Sandoval, granddaughter of Merril, expressed thanks on behalf of the family to the American Legion Hall - Post 3, the Navajo Nation Police Department, the Coconino County Sheriff's Department and the Flagstaff Police Department for their assistance throughout the day.