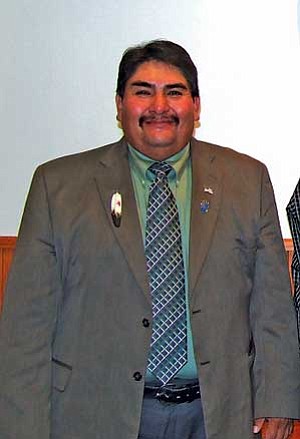 KYKOTSMOVI - Before a packed crowd of Hopi and Tewa citizens in the Hopi Tribal Council chambers and responding to public outcries demanding that he step down or be removed, Hopi Vice Chairman Todd Honyaoma Sr. announced in a regularly scheduled Tribal Council meeting Feb. 12 that he was stepping down from his position as Vice Chairman. He then gathered his belongings and left the Council Chambers.

Shortly after Honyaoma announced his resignation, Hopi Tribal Treasurer Russell Mockta also announced that he was resigning, effective upon appointment of his replacement.

Following at least two hours of public presentations challenging the Tribal Council's performance and calling for removal of Vice Chairman Honyaoma and several Tribal Council representatives, the delegated authorities of the Office of the Chairman were restored by a Council resolution rescinding three resolutions from the previous day.

On Monday, Feb. 11 the Hopi Tribal Council passed Hopi Tribal Action Item #003-2008, authored by Vice Chairman Honyaoma. The resolution was originally written to transfer all authority previously delegated to the Office of the Chairman over to the Vice Chairman.

During discussion, the language was changed to transfer all of the Chairman's authority to the Tribal Council. Two other action items were passed that day: Action Item #017-2008 to legitimize the payment for the personal legal defense of the Vice Chairman and Tribal Secretary, and Action Item #031-2008 to suspend the Tribe's Appellate Court.

It became evident that the Hopi and Tewa people exerted their "ultimate power" when they gathered outside the legislative building to protest the actions that were taken by the Tribal Council the previous day.

They demanded to speak to the council. After Chairman Nuvamsa addressed the crowd, they demanded that Vice Chairman Honyaoma come out so they could hear from him. When he did, he was mercilessly bombarded by the people's expressions of anger and dissatisfaction with his performance. Many demanded that he step down from office.

Many of the people who spoke demanded that the Vice Chairman, Tribal Secretary and Council Representatives Quochytewa and Johnson step down or be removed.

Bureau of Indian Affairs Superintendent Wendell Honanie was also present. Immediately after the public comments, he addressed the council by informing them that the actions taken by council on Monday sent a red flag to the federal government that the tribal government was broken. If the BIA determined that the Hopi government was dysfunctional and that federally- funded programs and services were at risk, the federal government, through the BIA, would take over operation of all federally-funded programs.

Superintendent Honanie explained that the federal government's relationship with the Hopi Tribe is a government-to-government relationship. This relationship requires that there be an individual with delegated authority to negotiate and sign contracts. A legislative body like the Tribal Council made up of more than one individual cannot fulfill that requirement.

Consequently, the federal government recognizes the Chairman of the Hopi Tribe as the tribe's official spokesperson.

Following Honanie's presentation, Council Representative Secakuku introduced an Action Item to rescind all three of the action items that had been passed the day before, as well as Resolution #036-2007, which illegally nullified the Special Election for Chairman in 2007.

The action item rescinding the previous day's actions passed by a vote of nine in favor and three opposed. This action fully restored the Chairman's authority, duties and responsibilities; disallowed the use of tribal funds to pay for attorney costs for Honyaoma and Felter; and restored the tribal appellate court.

It also rescinded the resolution that nullified the 2007 special election, which the tribal courts had previously ruled unconstitutional.

"If these actions had not been rescinded," Nuvamsa said, "we would have faced a long period of totalitarianism in our government - [essentially a] dictatorship. Perhaps even worse, we would have faced the real prospect of the federal government taking over the operation of our programs. This would have been a severe blow to the sovereignty of the Hopi Tribe. I know the Hopi/Tewa people rightfully expect a representative form of government, a democracy, and one that preserves tribal sovereignty."

"Monday was the darkest day in Hopi history," Chairman Nuvamsa said. "Now, there is a new horizon and I am hopeful that we can begin to restore the government to one that is responsive to the people and that puts the best interests of the Hopi/Tewa people first."

"Once again, the people have spoken. Let us begin the healing process and do what is expected of us as civil servants," he concluded.