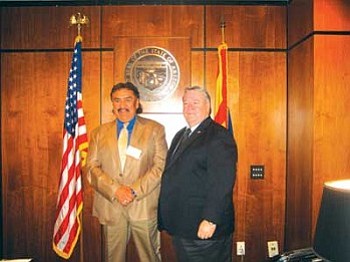 PHOENIX - Navajo Nation Speaker Lawrence Morgan feels the Navajo Nation and the Arizona legislature have an improved relationship, but he worries that pending state cutbacks will hurt Navajo programs.

Morgan and several members of the Navajo Nation Tribal Council met with state legislators Jan. 22 during Tribal Nations Day at the state capital in Phoenix.

Morgan said he was delighted with the outcome of a joint meeting between members of the Navajo Nation Budget and Finance Committee and Navajo Transportation and Community Development committees with Arizona legislators as they discussed the budget deficit. However, he said the Navajo Nation needs continued funding for programs and services at the current level.

There are two current budget proposals. One is from Arizona Gov. Janet Napolitano and another from the state legislature. Both attempt to reduce the deficit and both do so by cutting funding to programs and services to the Navajo people.

There are proposed cuts to eliminate funding to Diné College, Winslow Hospital and Sage Memorial Hospital.

Morgan said his office is committed to improving government-to-government relationships with all government sectors that work with the Navajo Nation.

"The networking and establishment of relationships was well worth the attendance at the state legislature," he said.

Morgan said that he and the tribal council members were able to advocate their concerns to the legislature about the budget deficit and proposed cuts to Navajo Nation programs. He noted that members of Arizona's 22 tribes were able to do the same.

"Our voices were heard by the state of Arizona and that was the substantive results of our trip to Phoenix. The Navajo Nation continues to voice their concerns about state issues that affect our nation. We shall soon see the results of our efforts," he said.

Morgan said his office has taken a leading role in advocating Navajo concerns to the state legislatures in Arizona, New Mexico and Utah, establishing contacts at all levels of government and continuing to follow up on the status of various projects. He added that Arizona and the Navajo Nation have a good working relationship.

"We are pleased with the working relationship that we have established over the years. There is always room for improvement," he said.

Morgan said the meeting between Navajo and Arizona officials on Tribal Nations Day is evidence of the good working relationship, "initiated to help strengthen and improve intergovernmental relationships with these officials."

Morgan said some projects do require Navajo matching funds, which the Navajo Nation is willing to do if it has to do so. However, he said the ideal situation would be for the states to provide funding without required matching funds.

He noted that sometimes the Navajo Nation is required to put out funds for programs and get reimbursed later. He said the Navajo Nation would prefer to receive funds directly rather than using Navajo monies up front.

Speaker Morgan praised Arizona State Sen. Albert Hale as well as State Reps. Albert Tom and Tom Chabin as helpful to Navajo efforts. He said the Navajo Nation also has other friends in the state legislature and they rely on their friends to help pass legislation that positively impacts the Navajo people.

"The improvements come through better communication from the agencies. This is also a day that is set aside for meeting with state legislators on Navajo needs," he said.