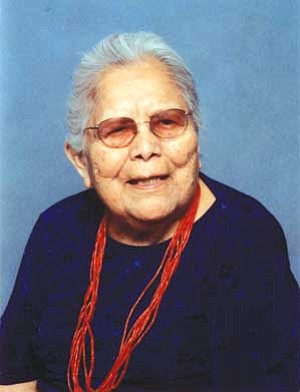 She was born June 16, 1917 in Cow Springs into the Honágháahnii (One Who Walks Around People) Clan, born for Tódich'ii'nii (Bitter Water) Clan. Her maternal clan is Deeshchii'nii (Start of the Red Streak People). Her paternal clan is Tábhá (Water's Edge).

Katherine attended school at Tuba City Boarding School and Ganado Mission School. She graduated from Ganado Nursing School in 1942. She was among one of the first Navajo registered nurses and worked throughout most all of the PHS hospitals and clinics on the Navajo Reservation. She also worked in several hospitals off the reservation. After 30 years of medical service she retired and lived in Kayenta. She continued to work after her retirement as she contributed to the John Hopkins Research Program.

She loved to teach people across the Navajo Reservation about health care, nutrition, and preventative care. She was a midwife and helped delivered many infants.

She was a religious woman and had a deep faith in God.

Funeral services were held Feb. 12 at the Norvel-Owens Mortuary in Flagstaff. She was buried next to her husband in the Veterans' section of the Flagstaff Citizens Cemetery.

Condolences can be sent to www.norvelowensmortuary.com. Norvel Owens Mortuary was in charge of arrangements.