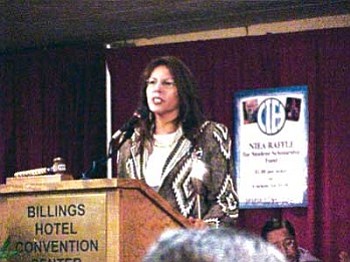 The National Indian Education Association would like to send its deepest condolences to everyone affected by the recent loss of Carole Anne Heart, 2001 NIEA President.

"It is with deep regret that I inform you that past NIEA President and friend Carole Anne Heart, passed away in Rapid City, S.D. Friday, Jan. 25 after a heroic battle with cancer. Our prayers and thoughts go out to Carole's family and all she deeply touched with her heart and humor. She will be greatly missed," said current NIEA President, Willard Sakiestewa Gilbert.

During her term as NIEA President, Heart spoke as a mentor, a mother, teacher and sister to the organization's membership and remained active in Native education issues throughout her entire life. At the 2001 NIEA Annual Convention, Heart spoke out about the use of names and logos that were derogatory to Native people. She supported alternative education systems, and advocated for strategies to increase the graduation rates of American Indian students, which NIEA continues today with the partnership in the Campaign for High School Equity.

Heart, Sicangu Lakota, had a great spirit that illuminated her work and her life. NIEA is fortunate to have known her, and especially fortunate to have worked along with her at the Aberdeen Area Tribal Chairman's Health Board to which she gave so much of her energy to achieve health awareness. She inspired and pushed people to higher levels of achievement. She will be missed for what she did and gave us all, but also for who she was.

Heart's tenacious goal to achieve education equality has persevered and her contributions will never be forgotten within the National Indian Education Association.

For more information regarding Carole Ann Heart, please refer to the NIEA Web site at www.niea.org.