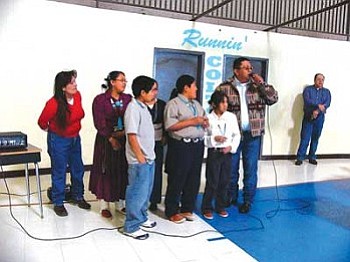 Master of Ceremonies Gilbert Thomas introduces fifth and sixth grade students who prepare to deliver the opening prayer in the Navajo language (Photo by S.J. Wilson/NHO).

BIRDSPRINGS - The parent group at Little Singer Community School (LSCS) takes the term "parent conference" a step beyond the typical meeting between teacher, student and parent. At least once a year, the LSCS parent committee arranges for a full day of presentations designed to bring parents into the school not just to view AIMS scores and schoolwork. Parents are given the opportunity to sit through presentations designed to update them on issues that affect their children and the family as a whole.

Gilbert Thomas served as the emcee for this year's Winter Parent Conference, held Jan. 25. He was joined by principal Etta Shirley in welcoming students and parents to the school for the day.

John Tsosie headed a presentation on fatherhood. Ernest Tsosie Jr. shared his personal story about how his alcoholism affected his family and himself-and how he rose above the situation. Stephanie Long spoke about domestic violence. Sausha Nells, Genevieve Davis and others manned health information booths. Entertainment was provided by Paul Joe and his family. Closing remarks were delivered by Judy Wagoner, Indian Education Committee president.

Reynolds "Rey" Nejo, a member of the Mesa Grande Band of Mission Indians and tribal police commander for the Gila River Reservation, addressed a topic that holds great concern for Native people across the nation-methamphetamine abuse.

Nejo said that he has traveled to many reservations, and wherever he goes, he hears the same story.

"Methamphetamine is on every reservation west of the Mississippi," he explained, saying that the drug is made of different chemicals found in stores, such as Drano, battery acid and fingernail polish remover.

"Don't let anyone tell you that these drugs will give you energy, make you a better athlete, help you lose weight," Nejo continued. "You've heard of glass, ice, 'G?' You've heard that it is cleaner, that it's of better quality? Don't believe it."

One of the principal ingredients of crystal meth, Nejo said, is acetate-a carcinogen. In the past, he said, alcoholism was the principal substance use problem on reservations-it is still there, but meth is out there now too.

As he clicked through a slide presentation illustrating the effects of meth-rotted teeth, facial and body sores and self-inflicted physical abuse, as well as abuse upon others-Nejo voiced the question that might have been going through the minds of members of his audience.

"Why would I do something like this?" Nejo said. "First of all, young people are curious. Guys, you'll do it because they'll tell you that you can have any girl that you want. Girls, you'll try it because someone will tell you that you will look slender like the girls in the 'Seventeen' magazine. But the reality is, meth is death-there's nothing in between."

Nejo described the psychological hunger that meth implants into the brains of its users, who will eventually come to the point where they will do anything to obtain more. Sadly, some of his examples included the killing of loved ones-infants, small children and pregnant women.

"Dealers want to be sure that they can sell their product," Nejo explained. "About eight or nine months ago, Strawberry Quick or Strawberry Ice surfaced in San Francisco. It is meth dipped in flavored syrup, just like what you get on snow cones. The dealers want to increase younger users and are targeting children six and seven years old.

"If you drank something sweet, would you think it is bad?" Nejo asked. "These guys are thinking, 'I can increase my profit. I can flavor my meth [and] send kids from the seventh and eighth grades down to kids in second and third grade to get those kids hooked on it."

Nejo went on to tell the audience that users will tell anyone that the first time one uses meth, it will be the most pleasurable experience in life. That pleasure drives users to do it again and again until nothing else matters.

"You will sell yourself and your children to get the drug," Nejo said. "I know, because I've ... bought children from their mothers just to get them safe."

Nejo has asked users why they use, and all tell him how great it felt when they started.

Though it is possible to break the habit and recover from meth use, Nejo said that the odds are against it.

"You are looking at a 45-day window," Nejo explained. "I've had kids come to me and tell me that they've been clean for two weeks, for 18 days, and I tell them to come back in 30 days, in 45 days and tell me that. Not one has ever come back."

Though meth is something relatively new to the average American consciousness, the drug actually has a history dating back to World War II. Scientists under Adolph Hitler developed it to create invincible soldiers.

"There are accounts from our soldiers about zombie-like German soldiers," Nejo said. "The Japanese gave it to their kamikaze bombers to numb their fear before flying their planes into their targets.

"Today the drug is purer-the effects of the drug last much longer. The worst thing of all is that most kids don't think it's dangerous," Nejo said.

In the final stages of meth addiction, people no longer care about their looks, their personal hygiene or their living conditions. They are plagued by paranoia, and visits from "shadow people." They become more violent. Meth use triggers the most severe child abuse and torture. As children become injured, their crying causes further abuse-and the more bloodied and disfigured the child becomes, he or she becomes less human to the addict, Nejo explained.

"When a person has gone a long time without sleep, they begin to see these shadow people in their peripheral vision. They can hear them talking to them. Shadow people will drive you into an insane rage," Nejo said.

He went on to describe frightening incidents of how users have eviscerated themselves, hung themselves, and hurt others. People have stabbed their infants over 100 times, burned children alive, dismembered them and more.

He described his own face-off with a young man who used his infant son as a club to attack others 24 years ago-an image that haunts him to this day.

Physical signs of meth abuse include an increase in heartbeat-up to 200 per minute, blood pressure heightened to levels of 220 over 200, and temperatures of up to 107 degrees-all leading to massive heart attacks and stroke. Users who can no longer obtain the drug will resort to suicide rather than live without the drug.

"Native Americans tend to hang themselves as a form of suicide," Nejo said. "Where you have communities with high numbers of hangings, this is a clear indication of meth problems."

"The waste goes into the land and watersheds," Nejo said. "They create areas that are ecologically dead. The people who live in the area become secondary victims. Some of these chemicals have a half life that will keep them in the water for 60 to 100 years."

Nejo addressed the parents directly in closing, stating, "Meth is here. It has to be dealt with. The feds aren't going to help us. We have got to help ourselves."