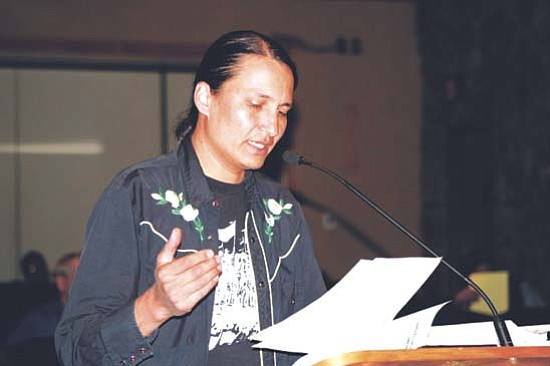 <i>Photo by Gary Elthie/NHO</i><br> Klee Benally reads online racial comments made on a newspaper’s Web site that were made after Native Americans initially protested the Snowbowl ski resort’s efforts to promote the use of treated sewage effluent to make artificial snow on the sacred San Francisco Peaks.

FLAGSTAFF, Ariz. - Four of the five members of the Navajo Nation Human Rights Commission recently visited the communities of Winslow and Flagstaff to hear public testimony regarding race relation issues in areas including housing, education and civil rights.

Chairperson Duane "Chili" Yazzie, Clarence Chee, Steven A. Darden and Irving Gleason spent over three hours in the chamber of the Flagstaff City Council listening to complaints that ranged from cultural insensitivity, disrespect and desecration of sacred sites, mistreatment and disrespect by places of employment and by places of business, the denial of legal process and clear, undisguised racism.

Kelvin Long, the executive director of ECHOES (Educating Communities while Healing and Offering Environmental Support), addressed the Save the Peaks effort against snowmaking on the San Francisco Peaks and other environmental issues in northern Arizona.

"There are unhealthy relations between the Navajo people and the city of Flagstaff," Long said. I know this from growing up here and my experiences within the community ," Long said.

Long described his experience with former Flagstaff mayor, Joe Donaldson, where a toilet bowl was placed on Donaldson's car during a forum concerning the Arizona Snowbowl's plan for artificial snowmaking - Long and two other Native American men were suspected of the act, Long said.

"I felt like I was being used as a catalyst for his [re-election] campaign," Long said.

Clayson Benally, who did not testify, was also a suspect in the act, and was detained by police on Mother's Day 2007, as he sat on the trunk of his car awaiting AAA services to retrieve his keys from his locked vehicle. Donaldson was inside the store and believed that Benally was stalking him, according to police reports. Benally denied even knowing what the former mayor's car looked like until he watched Donaldson hurry to his car while he was detained. Throughout the incident, Benally's keys were in plain view hanging from the ignition.

Bob Lomadafkie, a longtime citizen of Flagstaff and a member of the Hopi Tribe, spoke about the effects of relocation on members of the Navajo and Hopi tribes, and the allegiance held by many traditional Hopis against the relocation of their Navajo neighbors.

"We were opposed to relocation; we feel it was wrongfully imposed on the Dine'," Lomadafkie said. "We also addressed the pow wow in Flagstaff; there was a lot of negative talk that put Native Americans in a bad light."

Lomadafkie sits on several boards for Flagstaff organizations and is involved in issues such as homelessness and the recruitment and retention of Native American students at Northern Arizona University (NAU) - where he finds that one of every four students is Native American - predominantly Dine'.

Tony Skrelunas, who has worked for the Navajo Nation in various capacities revolving around economic issues, suggested the development of a Navajo-friendly business directory, where good customer service can be expected.

"We could provide cultural sensitivity training to business owners," Skrelunas said. "They need to understand our standards and traditions. We need to figure out an entity to represent off-reservation Navajos; so that they represented in the Navajo Nation. We need to develop more Navajo leaders in key positions off the reservation as well.

Another woman, an Anglo, stood to describe the treatment given to her and her Navajo in-laws when her husband was murdered outside Flagstaff. The two non-Indian men were never prosecuted for the crime - despite the fact that there were two witnesses who had heard the premeditated scheme before the shooting. The grand jury, she explained, declined to try the case.

"This wouldn't have happened if it had been me they shot that night," she said with conviction.

"My husband, a medicine man, is from Forest Lake," Berta Benally, another non-Indian, said. "He is a relocatee - relocatees are still facing the same issues - high suicide and alcohol and drug abuse rates."

Klee Benally said that the Peaks snowmaking case is a "critical threat to our cultural survival. The Peaks case is not the cause of racism - it has brought the racism out. We as Dine' are instructed not to go up to the Peaks unless there is an important reason. My father is a member of the Dine Hataalii Association. My brother and I are apprentices to him; we go on the Peaks to collect medicine and we've encountered J.R. Murray (general manager of the Arizona Snowbowl Ski Resort), law enforcement, the Forest Service and the county sheriff."

Benally described a paper he was given by Murray while he was conducting prayers on the Peaks, which identified two spots reserved for "protest" purposes at the Snowbowl. These areas designed to protect the experience of skiers who come to use the slopes. However, prayers have been interpreted as being protest actions.

"At the discretion of [non-Indians], this is the criminalization of traditional practices," Benally said. "Racist attitudes are still here; we have been forced to take issues such as snowmaking to court because we have no other recourse. We face institutional violence in the federal courts."

C. Dale Rafael, of Pima and Hispanic descent, spoke his concerns surrounding relocation and the Bennett Freeze - an area where until recently residents could not repair, build or improve their homesites. These individuals are known as the "Forgotten People."

"When I think of the reservation, I look at the Bennett Freeze," Rafael said. "People faced 40 years of confinement there."

He also listed land taking through imminent domain, deaths and Habeas Corpus Rule 32 issues as important to him.

Councilman Thomas Walker Jr. (Leupp, Tolani Lake and Birdsprings) represented residents of the Padre Canyon and Canyon Diablo residents who live along the north side of Interstate 40 east of Flagstaff. As these elders do not tend to leave their homes after evening, Walker brought their concerns to the Commission.

"There are unhealthy relations out there," Walker said. "There are non-Indians going onto the reservation to target shoot and hunt. People are dumping their trash out there."

Sam Minkler, who teaches at NAU, expressed concern for Native youth growing up in Flagstaff - youth who are not being heard and have no sense of community. On Navajo, we have a court modeled after the western world. In Tuba City, we have a bigger juvenile prison than recreational opportunities for our youth."

Beverly Smith moved to Flagstaff in 2001 to attend NAU.

"Yes, I've been discriminated against," Smith said before her testimony. "It doesn't matter how young or how old, it's everywhere."

Smith told the commission about her attempts to start a Native American Church Club on campus.

Monty Singer has worked in construction in Flagstaff for many years. Recently he was asked to leave a grocery store.

"I asked the clerk 'why?' three times," Singer said. "'Is there anything I've done wrong?' I told her that I don't do drugs and alcohol. I tried to get a phone number I could call [to talk about the issue] but I was refused. It's the same with the cops; it gets to where you'd rather be in a car than walking on the streets. It's in the school system as well."

Ron Interpreter moved from the reservation to obtain his education and currently resides in Cave Creek, where he runs his own business, Red Road Architects. He offered his appreciation to the members of the commission.

Interpreter also supported the idea of a chapter for Navajos who live in the Phoenix area.

"As Navajo, we are identified by clans, not by jurisdictional areas," Interpreter said. "There are a lot of people in Phoenix with families on the rez."

June Birdsong relocated from Big Mountain years ago due to the relocation law - and said that she'd found life in Flagstaff difficult.

"I've tried to live here," Birdsong said. "I've experienced hurtful treatment from the [Relocation] Commission. I had leave my animals behind, I could not plant corn - I didn't have the place or resources to allow me to live in harmony to continue the Dine' way of life."

"My son confronted the law; he's been through the court and the jail systems," Birdsong said. "I was treated with scorn as I tried to deal with the system.

"Young people [who come to Flagstaff to go to the university] don't have the resources or legal recourse when they get into legal problems," Birdsong said.

Darden expressed his gratitude to all who presented, and to those who listened quietly.

"I've had the great privilege to be a voice in this community," Darden said. "Like you, I've experienced racism-as a mixed blood I learned discrimination from my own Navajo people first. I've had many non-Indian friends. Not all of the people in [border towns] are racists. We are not here to just lambast these communities. I have faith that we can foster a win-win-win situation, encouraged by our forebearers.