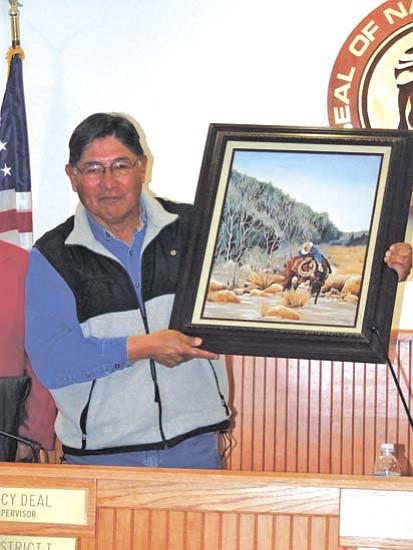 <i>Courtesy photo</i><br>Outgoing Navajo County Supervisor Percy Deal holds a painting by Cynthia Fernell Parsons, one of many gifts from the Board of Supervisors, County elected officials and employees, who honored Supervisor Deal at their Board meeting Dec. 16.

Supervisor Deal spoke of his years of serving the County, how his first few years of the term were turbulent as the first Native American to hold an elected position at the County level.

"When I was elected to the Board of Supervisors in 1978, I assured people that a bridge would be built because we live on the same land," he said. "Today, I'm proud to see the partnership built between this County and the Native Americans-a partnership where the Navajo are trying to do everything they can to make things better for their own citizens by using their own resources."

The Board of Supervisors had well-wishes for Supervisor Deal in his upcoming retirement. Supervisor Jesse Thompson, Supervisor J.R. DeSpain and Supervisor Jerry Brownlow expressed congratulations to incoming Supervisor Jonathan Nez, who will be taking over Deal's position on Jan. 1.

"Percy and I have seen a lot of challenges over the years, but we've done what we can," said Supervisor Thompson. "We send you our best wishes for retirement."

Supervisor Jerry Brownlow agreed. "Percy, we've had a lot of fun together and gone through a lot of trials together," he said. "I send my respect to you and your family. We're going to miss you."

Supervisor David Tenney thanked Percy for being a mentor as well as fellow supervisor.

"You've been a good teacher," he said. "I thank you, and I wish you Godspeed."

Supervisor Deal, in turn, recognized Assistant County Manager Dusty Parsons, County Manager Jimmy Jayne, Interim Public Works Director Homero Vela as well as the entire Board of Supervisors for their efforts to "build a better county, and make things in 'the beauty way.'"

"I know your past has been beautiful, and you will continue to walk in 'the beauty way,'" he said. "May the Great Spirit continue to be with all of you."