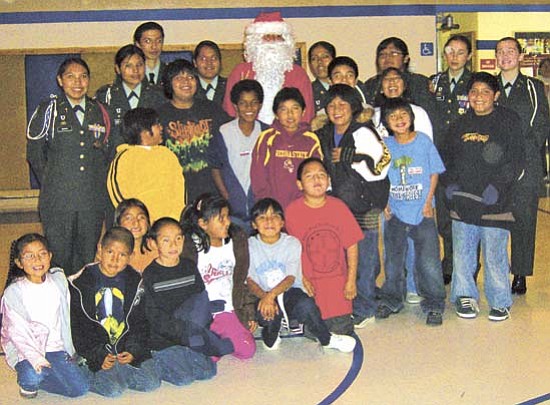 <i>Courtesy photo</i><br> The Hopi JROTC Battalion poses with Santa Claus and students that excelled in their class at Hotevilla/Bacavi Community School.

During the first week of December, members of the Bruin Battalion brought toys to their JROTC class to give to the students of those of who are the top of their class in all five schools.

The cadets gave 16 presents to eight boys and girls in every school from kindergarten to third grade. The kids were thrilled to receive presents, but were astonished that Santa Claus came to congratulate them on their job well done.

From school to school, the children were amazed to see Santa. The children also enjoyed their presents; they could hardly control themselves from opening up their presents. Also the cadets tried to hide Santa but the kids had already seen him. They were so glad to be able to talk to Santa and to tell him what they wanted for Christmas.

When the cadets got to the last school, which was Hotevilla/Baccavi Community School, they realized that they were short by a few presents. So Santa went to tell the students that he would bring their gifts next week. When the kids at Hotevilla saw Santa, they went crazy. Even without their gifts they thought they received the greatest gift of all by meeting Santa in person. After the long rewarding day, the cadets made their way back to school.

Cadet 1st Lieutenant Dixon said, "I enjoyed visiting the students at their schools. All the students were well-behaved. I hope to see more students next year excel in class."

Second Lieutenant Naha added, "The cadets did a great job and we made a lot of little kids happy."

Many of the Cadets hoped that next year, they would have more students participate in the event.