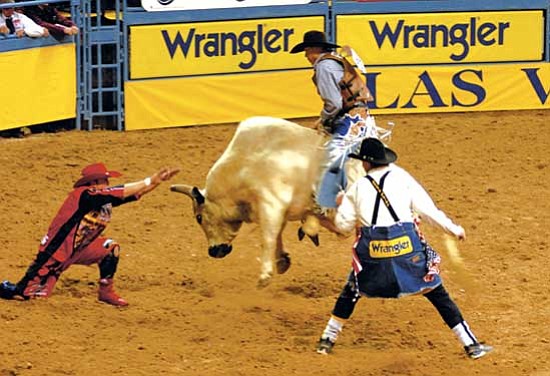 <i>Photo by Geri Hongeva</i><br> Spud Jones rides Bob from Mo’ Betta Rodeo during Round Two of the National Finals Rodeo at the Thomas and Mack Center in Las Vegas, Nev.

Both Navajos have appeared on national television over the past week, winning money as they compete along the way.

On Dec. 5, the Navajo Parks and Recreation Department (NPRD) hosted a reception honoring both competitors at the Mirage Hotel and Casino.

"In 2002, I predicted that within 10 years, the Navajo Nation would have a Navajo contestant competing in the PRCA National Finals Rodeo," Russell said. "Here we are, less than 10 years. That is great and I congratulate you for that."

Begay said the experience of competing in the biggest show in the sport of rodeo is awesome.

"It's unbelievable. There's no other feeling in the world like it right now. It's amazing," he said.

A 2001 graduate of Winslow High School, Begay said he competed in the sport of rodeo for as long as he can remember.

Growing up in Seba Delkai meant working the rancher lifestyle alongside his family.

"It's just the way I was raised, it's something that always surrounded me," Begay said. "One thing led to another and here I am now."

His disbelief in making it to the "Big Show" is rooted in childhood dreams and aspirations.

"I always envisioned [being here] and dreamed about it, but it was just one of those things I thought I'd never do," he said.

Begay's support for the NFR came from his parents and two sisters, all of whom traveled to Las Vegas to watch him compete.

The road to Las Vegas was filled with twists and turns. With each rodeo that came up, Begay had to focus on qualifying, even if it meant not competing in rodeos he'd usually hit.

"This year, I didn't get to go to the Indian Finals or the IIFR because I was trying to make the finals," he said. "They don't get any bigger than this here."

That larger-than-life perspective hit Begay like a brick when he walked into the Thomas and Mack Center for the grand entry.

"It's awesome to run right through [the arena] and see your family in the crowd," he said. "That has to be the most memorable part."

Beyond family and friends, Begay said getting support from Navajo fans is incredible.

"Thank you for supporting me out there," he said.

One supporter is the leader of the Navajo Nation, President Joe Shirley Jr. He was on hand at the reception to honor the Navajo cowboys.

"I feel very elated on behalf of my people," Shirley said. "I know there are many young eyes of the rodeo athletes that are on these two.

"I know if Spud Jones and Derrick Begay can do it, there's that hope and prayer from these rodeo athletes that we can do it, too," he added.

Shirley said dealing with livestock was inherent in the Navajo way of life.

"When the Twin Warriors finished killing off the monsters and giants, they went back to their father and they wanted a horse and that's what they were blessed with," he said.

President Shirley was excited to have two Navajo athletes stepping up to the next level in rodeo competition.

"Derrick and Spud, what they're doing is going where no Navajo has gone before," Shirley said. "This is history in the making and I didn't want to miss this for the world."