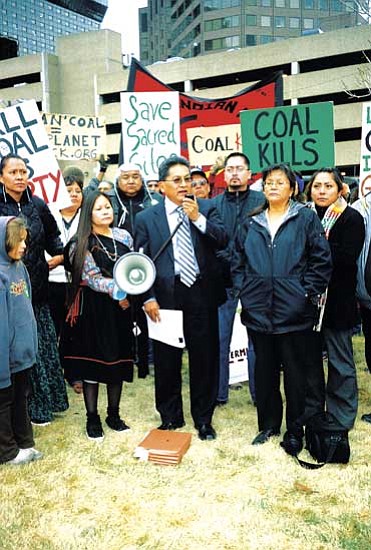 DENVER, Colo. - The Black Mesa Water Coalition under the leadership of Wahleah Johns, Enie Begay, Lillian Hill, Kelvin Long, Gordon Isaac and other concerned members of the Navajo and Hopi tribes traveled to Denver Dec. 8 to meet and talk with officials from the Office of Surface Mining (OSM).

Before a packed audience on the 33rd floor of the OSM building, many Native voices were heard. Many strong words, testimonials were expressed concerning the Black Mesa Project's final Environmental Impact Statement (EIS). The audience was informed by OSM officials that the EIS was already finalized and that the "record of decision" would be released by Dec. 15.

While the meeting was in progress, approximately 100 Navajos and Hopis stood outside in the cold Denver air to protest this latest action by OSM. Many protestors carried signs discouraging OSM from approving the life of mine permit. Support not only came from outside of the building. Throughout the morning, OSM's telephone and fax lines were bombarded with calls of support from across the country.

Several petitions regarding the EIS were presented to OSM officials.

Hopi tribal member Victor Masayesva represented the voices of Hotevilla Village, who wanted the EIS suspended. He also questioned if the OSM had conducted a proper cultural inventory of the lands, sacred shrines and special areas. He stated that if no cultural inventory was done, the EIS would not be in compliance.

A joint statement read, "Although we represent two different tribes we come today united to protect our shared land and water. Water is the life source to both our peoples and Peabody has failed to understand this connection. If the Office of Surface Mining grants a permit to Peabody our way of life and spiritual balance will be severely disrupted and altered. Currently, we are already suffering the damage this industry has caused over the past 30 years. We believe OSM has been negligent in fulfilling the NEPA process and if OSM issues a 'Record of Decision' that would be a breach of the Federal Trust Responsibility. United we ask the Office of Surface Mining to stop the'Record of Decision' process."

The "Record of Decision" is the final stage of the permitting process for the proposed "Black Mesa Project," which would grant Peabody Coal Company a "life-of-mine" permit, expanded mining operations and rights to tap the fresh water of the Navajo aquifer. The goal of the Navajo and Hopi tribes was to suspend the "Record of Decision" until after president-elect Barack Obama takes office next month.

Despite being in the midst of Hopi political turmoil, Hopi Tribal Chairman Benjamin Nuvamsa stated, "We have come here because we have many issues. I came here to represent the Hopi and Tewa people because they elected me into office. It is my duty to be here to speak on their behalf. I am asking OSM to grant us an extension. We want no more pumping, especially for coal slurry operations. I am asking OSM to give us more time so we can understand what this (EIS) is all about. Very few people know what the EIS is about."

Gordon Isaac, a Navajo tribal member and veteran of the Gulf War told the officials, "Peabody is not just digging into topsoil. They are tearing into people's lifeways."

"Hopis believe that this time of year is a very sacred and sensitive time ... We are taught not to be disruptive and confrontational during this time.  It is such a big sacrifice for us to be here in Denver, but OSM continues to release critical decisions during this time ... We feel an obligation to our families, clans, and future, so we have come here despite our cultural restrictions." said Racheal Povatah, a Hopi tribal member.

Gloria Johns of Black Mesa also testified. She lives just two miles from the coal mine. She stated, "Our ancestors have lived here for many years. We want to continue our way of life. I see my people hurt and damaged. Animals get contaminated. Once you extract the coal, it's contaminated. There is constantly noise, dust and fumes. How long will we continue with this issue?"

When asked if OSM would suspend the "Record of Decision," Director Klein replied, "We have a set of regulations and when a company puts on paper in their application how they

will fulfill the requirements, we do not have discretion. We have to grant them a permit. At this point we will not be changing the calender of events on this decision."

Ultimately, Black Mesa Navajo and Hopi residents are concerned about how this project will impact the future of their homelands.

"For decades coal and water from our lands have been taken to power Los Angeles and Las Vegas. Yet, we have have suffered the loss of our sole source of drinking water to accommodate the over consumption of these areas," stated Wahleah Johns, Co-Director of Black Mesa Water Coalition.

Following the emotional testimonials, Winterringer had no comment. Following the meeting, snow started falling in Denver, which the Native group saw as a blessing and sign of hope.

Black Mesa is the ancestral homeland to thousands of Navajo and Hopi families and is regarded as a sacred mountain to the Navajo people. It plays an integral role in the cultural survival for the future generations of both the Navajo and Hopi people.