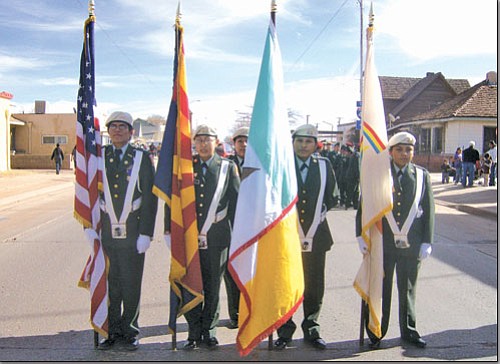 WINSLOW, Ariz. - Once again the Hopi Junior Reserve Officer Training Corp (JROTC) stole the spotlight at Winslow's 62nd Annual Christmas Parade. The parade was held Nov. 22. Although the parade didn't start until 1 p.m., the cadets were there by 10:45 a.m. to prepare for the one-mile parade by practicing their chants. While the battalion was practicing their chants, the Color Guard Team practiced presenting colors for the judges.

When the parade started, the battalion was ready to show their stuff in front of the city of Winslow as they marched along to the seven chants - "1-7," "Hey Hopi," "I Get a Line"," "Batman," "H-O-P-I," and "Hip-Hop Lollipop."

Although there were no rifle barriers, the Color Guard Team got plenty of compliments on how well they did. Team Captain Talayumptewa said, "They did an excellent job."

When they were done with the march, the cadets received plenty of applause and compliments about their chants and uniforms. Many of the cadets also managed to make their voices go hoarse, but still had enough enthusiasm to enjoy their lunch on their way home.

Although the original battalion commander was not there, the battalion still did very well and managed to impress the judges and their fans.