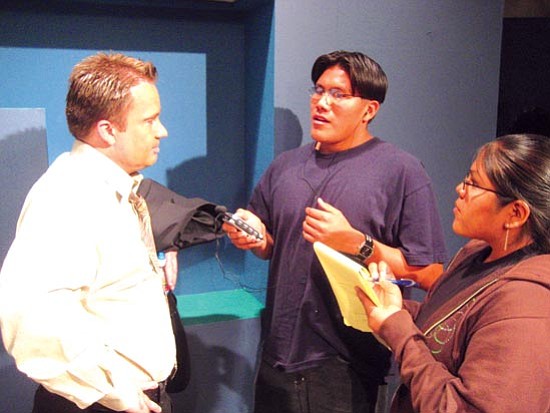 His main duty is reviewing four youth-produced pieces each month from youth throughout the country that post audio on PRX. His reviews are posted directly to the PRX site and can be found on the Youth EB page.

The idea behind the PRX Youth Editorial Board is to promote youth produced pieces. Quamahongnewa reviews four pieces each month. He was appointed in October and his three-month appointment will run until January.

Quamahongnewa, who has won several awards from the Arizona Interscholastic Press Association for sports broadcasting, has reviewed youth pieces about violence and relationships; the safety of drinking water; and growing up in the ghetto.

"The youth pieces are in their own words," he said. "It's about how they live in their communities."

Quamahongnewa said he learned that most youth have the same issues as those living on the reservations.

Quamahongnewa, who hopes to major in sports broadcasting in college, said through the PRX Youth Editorial Board he has learned how to review broadcasting pieces.

"I've learned skills about producing and how to get feedback on line," he said.

Quamahongnewa said he also learned about different cultures and what people go through on a daily basis.

"I've also heard a lot of opinions about what is going on in the world," he said.

PRX Youth Editorial Board has the mission of making sure that youth-produced pieces on PRX are recognized, reviewed and featured. Each of the youth board members receive training on how to review pieces.

Those on the PRX Youth Board must show initiative, personal responsibility and have reliable Internet access.

In exchange, they receive $100 per month, recognition on the Youth EB Homepage, the discovery of hearing new stories and knowing they are making youth-produced pieces bigger and better.

Quamahongnewa and his classmates also call news briefs into KINO in Winslow.