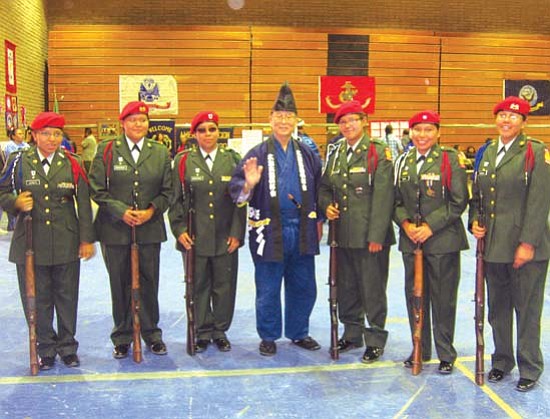 <i>Courtesy photo</i><br> The Hopi High Drill Team poses with a survivor of the Hiroshima bombing.

After the posting of the flags and a lunch break, the Bruin Battalion Commander Cadet Lieutenant Colonel Ryan Carl gave a brief overview of what the JROTC is about. When he was done the Hopi JROTC Drill Team performed for the 15 armed manual drill phase for the veterans. The Drill Team consisted of Team Captain Cadet 2nd Lieutenant Samantha Manycows calling commands along with six other members. Although the spectators thought the Drill team was fantastic, Cadet 2nd Lieutenant Amber Naha of the Drill Team said, "It was not one of our best performances."

Battalion Commander Cadet Lieutenant Colonel Ryan Carl said that being able to perform for the veterans was a nice experience and hopes that they get the chance to perform again in the future.