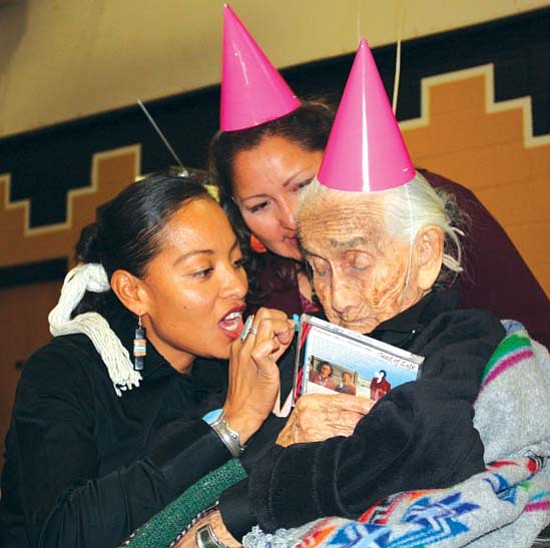 "I'm privileged and honored to [celebrate] our grandmother," Johnson said. "We've learned a lot from her and have learned the secrets of longevity."

The celebration was held at Black Mesa Community School where family and friends gathered for a luncheon. The celebration included six generations of Nellie's family. Johnson took the moment to remind the audience to take care of their parents and grandparents.

"Give them a lot of love," said Johnson, who presented Nellie with a coral necklace with a small heart pendant. A white Pendleton shawl was also presented to Nellie on behalf of Council Speaker Lawrence T. Morgan.

"Nellie Rose is a living treasure," Speaker Morgan said. "It is an amazing thing that she is still with us today. She has led a good life and has worked hard for her family."

Nellie can still walk and can carry on conversations with her family. Her eyesight has dwindled over the years, but she can still recognize the voices of her family.

"We just really appreciate her," said Rosie Bitsui, 50, a paternal granddaughter to Nellie. The day was emotional for family and friends who cried tears of joy and thankfulness.

Nellie was born in Kitsili, near Black Mesa and attended boarding school as a child. She had livestock and sheep throughout her life and was a foster grandparent at the Black Mesa Community School. At the school, she taught students about weaving, traditional recipes and Navajo philosophy. Many of the children she taught are now adults with their own children, and said they still remember the stories she told when she was working at the school.

Her family said she is very active in her old age, and walked several miles everyday when she was 98-years-old. Being active and living by teachings of the Navajo philosophy are what the family credits to her longevity.

"It's a blessing to have her at this age," said Larry Whitehair, 38, grandson to Nellie.

Many said her birthday served as an informal family reunion and allowed them to reflect on "k'e."

Family and friends were honored that leaders from the Navajo Nation attended the event. Navajo President Joe Shirley Jr. was also in attendance and presented Nellie with a Pendleton shawl.

"This is really special to have our Navajo Nation leaders here to celebrate her birthday," said Frank White, 58, grandson to Nellie.

Radmilla Cody, award-winning recording artist, also attended the event with her grandmother. She is also a granddaughter to Nellie.

"Come bless yourselves with grandma," Cody advised the young children in both Navajo and English.

Cody also sang "Happy Birthday" in the Navajo language before the cake was presented. Nellie blew out her own candles.

"Ahe'hee," she said. "Thank you everybody for being here."

Speaker Morgan said he hopes the young grandchildren of Nellie will seek the traditional knowledge their grandmother has - the knowledge once passed onto her by her own grandparents.