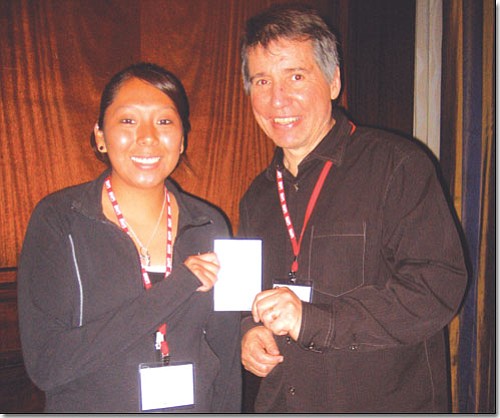 POLACCA, Ariz. - Povi Lomayaoma, who graduated from Hopi High School in May, has received a $5,000 scholarship from the Native American Journalists Association (NAJA).

Lomayaoma's scholarship was specifically selected by the Newhouse Foundation, which owns the Washington Post, and CNN.

Lomayaoma plans to major in journalism and minor in radio broadcasting at Ft. Lewis College in Colorado.

Lomayaoma recently addressed the Hopi High radio class to tell them about her experiences. She attended the UNITY Journalism Conference in Chicago this past summer where she recorded a piece about leaving the reservation and missing her clan traditions.

Lomayaoma said putting the piece together was hard work because it required announcing, cutting and editing.

Her recording can be found at www.unitynews.org and selecting "Leaving the Reservation."

Although she was one of the youngest attending the UNITY Conference, Lomayaoma was able to surprise her fellow attendees because she knew the radio equipment and how to approach a radio news story or commentary.

Lomayaoma credits the radio classes at Hopi High School, along with her attendance at the National Federation of Community Broadcasters (NFCB) Conference in Atlanta, Ga., with preparing her for the UNITY conference as well as studying journalism and radio in college.

Lomayaoma said obtaining the $5,000 scholarship from NAJA is "cool" because it will help her pay for her books, room and food. Ft. Lewis College waives tuition for Native Americans.

Lomayaoma said she selected Ft. Lewis College because it has a good journalism and radio program. As soon as she gets to campus, she plans to join the campus newspaper and radio station.

Jeff Palmer, executive director of NAJA, said Lomayaoma was into everything at the UNITY Conference.

"She was one of the younger ones there, but she held her own," he said.

Palmer said Lomayaoma's application for the scholarship was compelling because of her high school journalism and radio experience, her high grade point average and her attendance at NFCB as well as the UNITY conference.

Palmer said the scholarship would be important to Lomayaoma because housing at Ft. Lewis College is expensive.

"Povi is way ahead of the curve. There [aren't] many college freshmen who have a chance to go to UNITY. I'm looking forward to getting more scholarships for journalism students from Hopi High School," he said.

Lomayaoma won awards while working in the Hopi High radio and journalism classes. She served as sports editor of the Hopi High School Bruin Times. She was a major contributor to the Hopi High Teen Show, the only live remote Native American teen talk show in the nation. She was twice named the Hopi High journalism student of the year.

Lomayaoma ran for the Hopi High girls state championship cross country team and she was named a Scholar Athlete.

Lomayaoma was also one of 18 students in the nation selected to attend the Georgia First Amendment Foundation's training about the First Amendment at the NFCB conference in Atlanta. She produced a piece, along with two other youth, about Martin Luther King.

Lomayaoma finished in the top 10 in her graduating class.