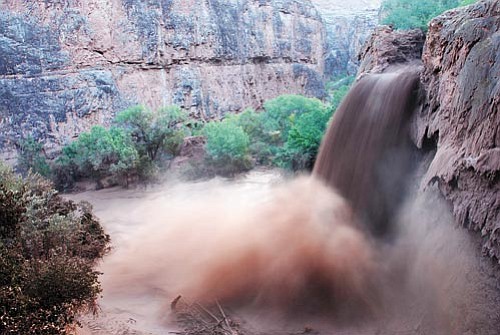 Severe weather over the weekend led to storms that dumped between four and eight inches of rain in Grand Canyon country, prompting an evacuation from Supai Village and spawning a small tornado about 10 miles south of Grand Canyon National Park.

The tornado was reported at about 1:40 p.m. by a trained weather spotter on Saturday, about 15 miles northwest of Valle which is about 25 miles south of the park. It caused no damage, said Brian Klimowski, meteorologist in charge at the National Weather Service's Flagstaff Bureau.

On Sunday night, about 170 campers and residents were flown out by helicopter and evacuation operations were still ongoing on Monday, with another 120 or so expected to be flown out.

According to Gerry Blair of the Coconino County Sheriff's Office, some residents were planning to stay, as the water had not reached buildings in the village.

He said that about 11 people are unaccounted for and are the subject of a search and investigation into their whereabouts.

During the flooding, the water was running at 4,731 cubic feet per second.

Supai Canyon's iconic blue waterfalls attract thousands of visitors to the village of about 400 members of the Havasupai tribe live there permanently. It is about 75 air miles west of the park.

Coconino County officials heard of the breach of the Redlands Dam at 6 a.m. Sunday. Eight public service agencies assisted with the evacuation.

As of Sunday night, DPS and National Guard helicopters had evacuated 170 people and representatives from the county, BIA and U.S. Marshals remained with the rest until morning. Some individuals who were believed to be in the canyon at the time of the flooding are currently unaccounted for. Rescuers conducted an extensive search for those missing individuals today and will continue their efforts throughout tomorrow. Evacuees are being sheltered by the Red Cross at the Hualapai Tribal Gymnasium in Peach Springs.

As of last Sunday, the road into Havasupai was closed at Route 66 and Indian Road 18 leading into Hualapai Hilltop. Residents and campers will not be able to access Supai Village and the Havasupai Indian Reservation at this time.

Members of the public with questions regarding the location of people who may have been in the area are advised to call the American Red Cross Evacuation Center at (928) 769-2654.