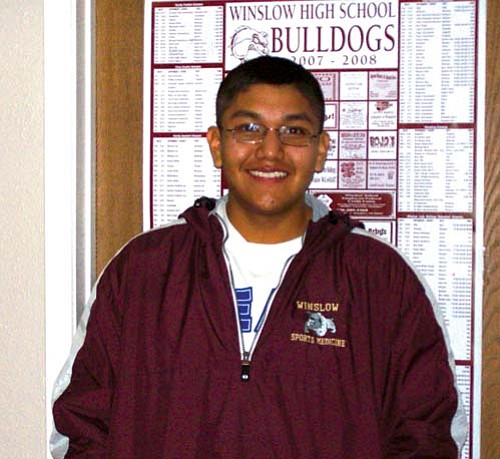 WINSLOW, Ariz. - Winslow High School senior R. C. Brown has completed a five-day crash course in college life at Duke University. Brown, Diné, is the defending Arizona State prose champion and was a third place finisher in poetry competition last school year. He is the president of the Winslow High Speech and Debate Club, an office he also held as a sophomore and junior. He is the manager of the Winslow Bulldogs football team and was the only manager on the team for the past three years. He believes it is important to do well in his education and other opportunities.

Brown was born in Flagstaff, but his parents lived in Winslow and he is, for all practical purposes, a native. His mother is Yvonne Fuson, a graduate of Winslow High School, and his father is Darrell Brown, a graduate of Holbrook High School. Fuson is currently in Wyoming while Brown works in various locations on the reservation.

He has three sisters and a brother. The sisters are Devonnie Brown, 16 and a sophomore at Winslow High School, Mesha Fuson, 13 and a seventh grader at Winslow Junior High School and Valentina Brown, nine and a fourth grader at Thomas Jefferson Elementary School. His only brother is BoDon Tootsie, three years old and a confirmed sports fan and companion for R. C.

Brown said that the course at Duke cost $200 for the program plus air fare to the college in North Carolina. There were 90 students in attendance from all over the United States. They met with college admissions officers who were willing and able to help them learn what to study and pay attention to when they were preparing to go to college. Brown said that he obtained many valuable contacts with whom he remains in close touch and whom he feels comfortable asking for advice.

Winslow schools have provided all but less than two years of Brown's educational experience. He attended Thomas Jefferson Elementary School until his seventh grade year when he moved to Lawrenceburg, Ky., for two years. He returned to Winslow for the second semester of his eighth grade year and has remained through his high school career.

He has worked at KINO Radio since he was a freshman and admires KINO owner and announcer Loy Engelhardt. He says that he has learned much from Engelhardt and feels honored to work for him. He says that Winslow is lucky to have a radio personality the caliber of Engelhardt in the community.

Brown says that he has learned from quite a large number of people in the school and the community. He cites Sarah Smithson as being especially valuable as a teacher, coach and advisor for him. He even describes her as a 'second mother.' She is the individual events coach for the high school speech and debate team. Another helpful coach for him on that team is Mary Ann Richardson who is the debate coach.

He said that he has learned from many people around him in school and elsewhere, including the custodians. Two teachers he cited were high school English teacher Bill Hayes and kindergarten teacher Miss Moore. He said she was the first to encourage him to look at things closely and learn to describe them.

He says that he expects the Winslow Speech and Debate Team to be very successful this year. The team has Brown as its only senior member, but also four other veteran members. Jane Manthei, Kendra Huddleston and Cambra Turley are all juniors and Adrian Horton is a sophomore but was a team member last year. Huddleston finished sixth in state competition last year. Brown says that all of these veteran team members give 110 percent in practice.

Brown has been the veteran of the team since his sophomore year. He describes speech and debate as bringing the greatest changes to his life and credits the experience of competing against the best and the brightest from other schools as being a positive influence in his life.

While he is a highly respected and valuable manager of the football team, his only other competitive sport is golf. He says that he enjoys the game and the talented coach of the high school team, Ted Pate.

Success has been frequent in Brown's high school career. He finished eighth in Arizona in prose and fourth as a sophomore before winning the state crown as a junior. He was third in poetry as a junior and plans to work hard to win both titles this year.

Defending his state title successfully is a big goal for Brown.

"If you want to stay up front in anything," he quotes an adage, "You need to act as if you are behind."

He is impressed with meaningful quotations and notes another he heeds.

"Nothing hurts more than having to say, 'I should have done more," he said.

Brown plans to attend Arizona State University and study journalism. He eyes a career in radio or television, but also likes writing. He is no longer involved in publication, but was a co-editor of The Bulldog Barks as a sophomore. He believes that he does have some writing talent as that compliments speech and debate.

He currently lives with his grandmother Betty Fuson and admires her greatly as a positive influence in his life.

Brown said that while he is Navajo, he does not know if he is related to any famous Navajo. He quipped that he hopes someday his younger brother will say that he is the famous Navajo he has as a relative.

He said that he is glad he went to the course at Duke and feels that it will make him a better student this year at Winslow High and make success in college and beyond more likely regardless of where he goes to further his education.