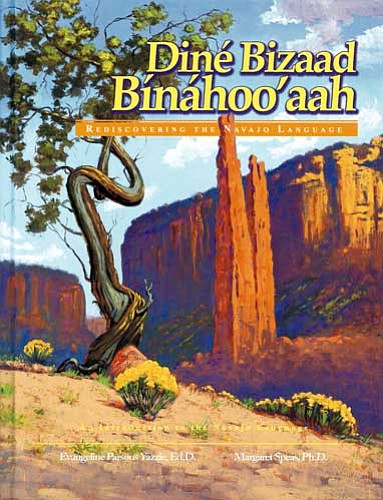 FLAGSTAFF, Ariz. - For 18 years, Evangeline Parsons Yazzie taught Navajo without a textbook she felt represented both the Indigenous language and its culture, until she decided to write her own.

The book was created for high school and college students, but is written for anyone wanting to learn Navajo. It presents a verb-based introduction to the language along with clear explanations of the indigenous vocabulary, grammar, and culture. It also is the first textbook written and published by a Navajo academic.

The tricky part says Parsons Yazzie, was documenting a language that developed through the spoken word and that is tied to its culture.

"Many texts about American Indians don't include cultural information," she said. "But you can't divide the culture from the language when the two grew up together."

Parsons Yazzie looked to her own experiences growing up to permeate the glossy pages with Navajo syntax, eloquent narrative and photography from an array of sources, including dozens of rare images she discovered in boxes at the Ameritribes, formerly the Navajo Gospel Mission, archives in Tucson.

Simple bilingual captions grace the photography that spans decades of Native life. Both vintage and contemporary images of families, sheep camps, cornfields, clothing, weaving, tools, foods and traditions, such as making cake for a puberty ceremony, are featured along with photos of Parsons Yazzie's relatives and acquaintances.

She learned the language from her relatives while growing up on the Navajo Nation in Hardrock, Ariz.

"During a time when people were gravitating toward learning English, my father started many churches where he would provide his own Navajo translation of the English Bible verses. My mother would play the piano and we would sing Christian Navajo songs, learning the language," said Parsons Yazzie, who consulted tribal elders throughout the three years she worked on the book.

"In traditional cultures, elders protect their language through storytelling, but we are losing our speakers because our children are not picking up the language," she noted. "I felt that it was important that a Navajo academic write this book. It should be a Navajo saying, 'this is how my language is written and taught.'"

Rediscovering the Navajo Language's early chapters focus on the Navajo alphabet and its complicated sound system, depicted through a series of symbols. Themes of the chapters include the Navajo Nation government, clan relationships and the Navajo calendar's names of the month and the stories that go with them.

For example, the Navajo word naashnish in Navajo translates in English as I am working.

A teacher's guide, a workbook and a CD, with Parsons Yazzie and Berlyn Yazzie, discussing the language and sounding out verbs, will be available by the fall of the 2008-2009 school year.

Veronica Garcia, New Mexico's Secretary of Education, declared it as an historic event when New Mexico recently adopted Rediscovering the Navajo Language as the state's official Navajo language textbook for 10 school districts. New Mexico is the first state in the nation to adopt an American Indian language textbook.

Margaret Speas, a professor of linguistics at the University of Massachusetts and longtime collaborator with Parsons Yazzie, co-authored the textbook.