Forest Service, Snowbowl win right to use fake snow
Money wins out over religion, some say 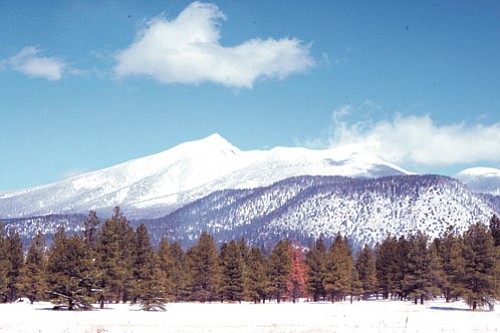 <i>Photo by Jeff Brostrum</i><br> The San Francisco Peaks, seen in this undated photo, are held sacred by more than 13 Native American tribes. On Aug. 8, the Ninth Circuit Court of Appeals in Pasadena, Calif. ruled against the tribes, thereby giving permission to the U.S. Forest Service and the Arizona Snowbowl ski resort to commence with plans for the eventual use of reclaimed wastewater to make artificial snow for skiiing on the sacred mountain.

FLAGSTAFF, Ariz. - Just one day after Indian Country registered its shock over the settlement in Cobell v. Kempthorne - $455.6 million rather than the $58 billion sought - 13 Arizona tribes learned that they had lost their bid to protect the sacred San Francisco Peaks from desecration by the use of treated wastewater to make artificial snow at the Arizona Snowbowl ski resort.

Attorney Howard Shanker, who represents the Navajo Nation, White Mountain Apache, Yavapai Apache, Havasupai, the Sierra Club and other plaintiff-appellants, said that the Ninth Circuit en banc hearing was the last best chance for tribes to have legal protection under RFRA.

"The Court places itself in the position of judging the legitimacy of Native American beliefs and practices. It becomes the arbiter of religion, which is not the proper role for the courts. The evidence clearly shows that using sewer water to make snow constitutes a significant burden on the tribes' ability to practice their religion," Shanker said.

"The judges felt that the use of reclaimed water would not impact or affect the tribes' religious practice, and that any harm would be merely subjective," Shanker said. "When President Shirley of the Navajo Nation testified that making artificial snow on the Peaks was like raping his mother - for a judge to say that it's not that bad is clearly wrong."

"This decision closes the coffin on tribes' rights to protect their sacred sites," he continued.

Shanker denied that the court battle was merely a war of semantics.

"This is a question of law," Shanker said. "If the plaintiffs say that this is a burden on their religious practice, this Court should not say it's not. Short of having God testify in court on whether the damages are subjective, the Court should not make this determination."

As a Congressional candidate for District One, Shanker said that if elected, he would continue to represent Native American religious rights, and that there was precedence that would allow him to argue a Supreme Court case on behalf of his current plaintiffs

"We had hoped that the opinion would be favorable," Nuvamsa said. "I am sure I echo the sentiment of our tribal council, and we will be considering moving forward to appeal the case to the U.S. Supreme Court.

"I think this case is important not only to the Hopi Tribe and other Arizona plaintiffs, but to all of Indian Country. This decision will damage all other instances where tribes protect areas they hold sacred," Nuvamsa continued. "Once again the interest of money over sacred sites has come out ahead."

The irony that the economic contribution of the region's Native tribes greatly outweighs that of the Snowbowl was not lost on Nuvamsa.

"The Peaks are very sacred to the Hopi people," Nuvamsa continued. "They are the sacred home of the Katsinam, who are responsible for bringing water to the [region].

"The Court failed to consider the claims of the impacts to human health from coming into contact with the treated waste from reclaimed water and did not take seriously the tribes' legal claims because of a court technicality," said Andy Bessler with the Sierra Club in Flagstaff. "The decision leaves unaddressed water quality issues, since the Court failed to decide if using reclaimed water on the Peaks was safe for the environment or for human health."

"The preliminary March ruling was one of the most important in recent years under [the Religious Freedom Restoration Act] (RFRA)," said Sierra Club Environmental Justice organizer Robert Tohe. "In addition to finding that the snowmaking plan would have desecrated this sacred area, the court decided that the U.S. Forest Service failed to fully disclose the risks posed by human ingestion of artificial snow.

The Court summarized Navajo Nation, et al. v. United States Forest Service, et al. as "American Indians asking us to prohibit the federal government from allowing the use of artificial snow for skiing on a portion of a public mountain sacred in their religion. At the heart of their claim is the planned use of recycled wastewater, which contains 0.0001 [percent] human waste, to make artificial snow. The Plaintiffs claim the use of such snow on a sacred mountain desecrates the entire mountain, deprecates their religious ceremonies, and injures their religious sensibilities...We hold that it does not."

Though the Court found the plaintiffs' beliefs "to be sincere," it went on to conclude that "there are no plants, springs, natural resources, shrines with religious significance, or religious ceremonies that would be physically affected by the use of such artificial snow. No plants would be destroyed or stunted; no springs polluted; no places of worship made inaccessible, or liturgy modified. The Plaintiffs continue to have virtually unlimited access to the mountain, including the ski area, for religious and cultural purposes, and that any effects would be on "subjective spiritual experience," which would be "offensive," but placed no burden on the practice of religion.

The Court minimized the effects, stating the Snowbowl represents about 1 percent of the Sacred Peaks, and that other uses, including camping, hunting, timber harvesting, grazing, the presence of electric lines, water and gas pipelines, already exist.

The Court stated that the Forest Service is burdened by between 40 to 50 thousand prehistoric sites in the region, that one tribe in particular holds the entire Colorado River sacred, and that new sacred areas are being recognized by the plaintiffs on an ongoing basis.

The dissent accused the majority of contending that "the Indians consider virtually everything sacred...The majority implies that if we hold...that there has been a substantial burden in this case, there is no stopping place." Further, testimony from witnesses clearly established that though indeed, Native Americans consider everything sacred, there are "degrees of sacred," and the San Francisco Peaks is extremely sacred. Further, belief that the Peaks are a living thing, and that what desecrates one small piece desecrates all clearly places a substantial burden on tribal members.

The RFRA states that, in general, "Government shall not substantially burden a person's exercise of religion even if the burden results from a rule of general applicability, except where the Government can demonstrate a furtherance of a compelling governmental interest and is the least restrictive means of furthering that compelling government interest.

The Court summarized that under RFRA, a "substantial burden" is imposed only when individuals are forced to choose between following the tenets of their religion and receiving governmental benefit, or coerced to act contrary to their religious beliefs by the threat of civil or criminal sanction - and that the use of recycled wastewater on a ski area does not force the Plaintiffs does neither.

"The majority misstates the law under RFRA in three ways," Fletcher wrote in the dissent. "In the hands of the majority that test is extremely restrictive, allowing a finding of 'substantial burden' only according to the dissenting opinion.

"The majority's narrow definition of 'substantial burden' conflicts with RFRA's text and purpose," Fletcher said, an approach conflicting with the circuit's prior application of the act.

The majority found that "the only effect of the proposed upgrades is on the Plaintiffs' subjective, emotional religious experience," and not a "substantial burden."

Dissenting justices disagreed, and that the majority "misstates the evidence...misstates the law under RFRA and misunderstands the very nature of religion...The majority characterizes the Indians' religious belief and exercise as merely a 'subjective spiritual experience...Contrary to what the majority writes, and appears to think, religious exercise invariable, and centrally, involves a 'subjective spiritual experience."

Further, the dissent pointed out that government could substantially burden the exercise of religion in the furtherance of a compelling governmental interest, by the least restrictive means of furthering that interest and snowmaking did neither.

"If Indians' land-based exercise of religion is not protected by RFRA in this case, I cannot imagine a case in which it will be. I am truly sorry that the majority has effectively read American Indians out of RFRA," Fletcher concluded.