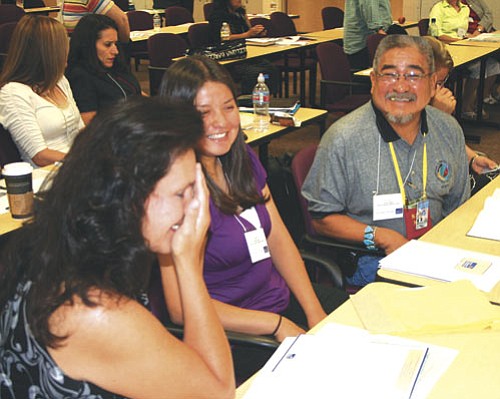 PHOENIX, Ariz. - The Navajo Nation Special Diabetes Project (NNSDP) made a presentation before the Arizona Diabetes Coalition meeting on July 18 regarding Wireless Monitoring and Access in the Navajo Nation (WiMANN), which involves the utilization of weather balloons and a transmitter/receiver that would hover above the Navajo Nation.

Speaking on behalf of the NNSDP, Stephen Jennings of Wireless Monitoring Services of Phoenix reported that the project will involve providing wireless services to 1,000 Navajo citizens in the Western Navajo Agency along with people from the Hard Rock and Black Mesa Chapters.

The project utilizes an innovative application of communication technology through the balloon and a transmitter/receiver, which will assist diabetes patients to monitor their blood glucose and send them to a database. If there is a health problem, then NNSDP staff will be able to refer the patient to the nearest clinic or hospital.

This project came about a year ago under a directive from Navajo Nation President Joe Shirley Jr. and the Division of Health.

The fundamental challenge in reaching many of the diabetic patients on the Navajo Nation is the remote geography and lack of telecommunication services. The telemedicine services used under this application provides health care services to clients/patients that currently have no daily monitoring access because of their remote location and the inadequacy of wireless services.

The WiMANN project will utilize specially modified Personal Digital Assistants (PDAs) using non-terrestial wireless infrastructure supported by standard weather balloons floating between 80,000 and 100,000 feet above ground. This new way provides a wide area coverage that will allow diabetic patients and individuals who are at risk of diabetes to receive access to health care monitoring services that are not available to them because of lack of telecommunications services where they live.

Nakai said that he received several comments about support for the project and interest to see how well it works so other areas of the state can consider possible use of such technology in their areas. Nakai also said that he was glad they were invited to participate in the meeting and got a better understanding what the state of Arizona is doing in combating diabetes in their areas.